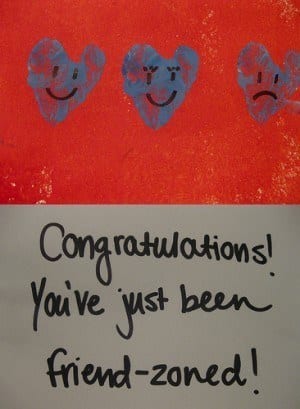 Reasons why you’re constantly in the “friend zone”

You’re confused, frustrated and utterly worn out by the dating world. Time and time again you find yourself hearing the words, “You’re a great person, but can we just be friends?”

Another opportunity lost with who you hoped to be a potential partner. So what are you doing so wrong that makes the one you like turn their head? You ask friends for advice and a majority of the time, the response you get is that you shouldn’t give up on love.

Well, it’s a good thing we’re not necessarily friends because I’m about to explain what it is you might actually be doing wrong or lack there of.

Less talking, more flirting: Now don’t starting thinking this should be an attempt to get into their pants. The obvious will only be stated here. A lot of people, especially men, are “friend zoned”. Reason being, they’re lacking in the charm department. Yes, every healthy relationship should begin with a solid friendship, but if the person you’re interested in doesn’t see your flirty side, they’ll never view you as a potential partner. So give them that look, wink a little bit and flash your million-dollar smile. The next time you see them, stand a little closer, make your hug last a little longer (you are at least hugging them, aren’t you?) and don’t be afraid to brush the hair from their face. Adding in a bit of affection shows you’re attracted to them and want the opportunity to be more than just friends.

Take a second look in the mirror: I’m telling you right now if you don’t own deodorant or decent clothing, you’ll be placed in the “friend zone” before you even have the chance to deliver your opening line. You’re not expected to go out and buy a new wardrobe, but you should present yourself in an attractive manner. Put away the flip-flops and bring out a nice set of shoes. Don’t think sporting your favorite polo from ten years ago is winning you brownie points. Dress nice and look approachable. Highlight your figure without overdoing it. Style your hair in a way you think looks hottest. Constantly wearing loose sweatpants and hooded sweatshirts around the person you’re trying to win over won’t work. If you don’t dress to impress, then just what exactly are you doing? You may have a great personality, but if you don’t appear desirable, your funny jokes and attentiveness will make you their friend…on Facebook.

“You’re SUCH a good FRIEND”: Tired of hearing these words? Being a good friend is definitely a compliment, but for once, you’d like to hear the words “I’m really attracted to you” or “I think we could be more than friends.” The way you speak and act around the person you like will determine everything. Try to put yourself in their shoes. Are you always asking them about potential partners? Do you offer advice when it comes to dating? How are you portraying yourself in their eyes? Without even realizing, you may be headed towards a great friendship…and that’s it. Chances are, they have a best friend they go to for relationship advice and what to do about the good-looking guy/girl they met at the bar. By putting yourself in their best friend’s chair, you’re well on your way of being “friend zoned.” You’re not trying to be the person they run to when their partner breaks up with them, you’re trying to be THEIR PARTNER. Do things a best friend wouldn’t necessarily do. This includes flirting, late night conversations in the car, dates and random gifts delivered to their home or work. If you don’t want to be in the “friend zone,” stop trying to be their best friend.

A hot mess of problems: Some people have no problem discussing their personal life or unending disputes they’re facing, but you shouldn’t be one of them when it comes to the person you like. If you’re trying to win over a person’s heart, constantly talking about your lingering ex, family drama or untrustworthy friends isn’t something they want to hear about everyday. If you’re surrounded by endless, exhausting problems, first and foremost, deal with them before trying to gain their affection. If you’re having a hard time sorting through these issues, what makes you think you’re ready to take on a relationship? And even if you make it to the point where the two of you are discussing the possibility of being more than friends, do you really think it’s fair to drag them into your unorganized, problematic life? Odds are, a big reason they’ve thrown you in the “friend zone” is because you’re a hot mess. Deal with yourself before trying to take on something else.

Dating profile reads: “Desperately Seeking Spouse”: First and foremost, delete your online dating profile and wake up! You need to realize how young you are. Stop listening to society and believing the words, “you’re running out of time.” The pressure of getting married and having children shouldn’t affect you right now. You need to relax and let it happen when the time is right. If you’re constantly trying to find the right person for you, you won’t. You’re not in the right mindset. If you’re so desperate to find someone, you’ll do anything. This means you’ll go as far as changing who you are, saying yes to everything they want and placing their happiness above your own. Then what can you say for yourself? Not much. You’ve lost your identity and maybe even some friends along the way. Until you accept the fact that love doesn’t run on a meter, you’ll settle for anybody who’s willing to go out with you. Have some patience, set your standards and remain focused on the future. If the person you like “friend zoned” you the other day, it may be because you’re displaying a lot of desperation and not enough concentration. Nobody wants to be with someone who’s desperate. Concentrate on what’s important and when you least expect it, the right person might actually approach you, rather than the other way around.