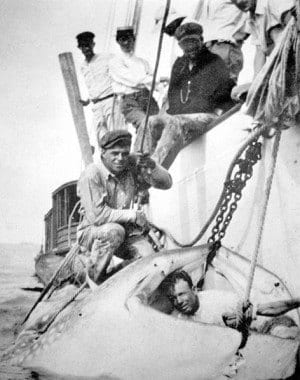 Like a scene out of “Jaws,” a 36 foot-long whale shark was heaved out of the Arabian Sea in to Karachi Fish Harbor of Pakistan Tuesday.

The fisherman who pulled the whale shark out of the water say that they found t dead out at see. Though, there is much speculation that it may have originally become tangled in a net, causing it to die.

The massive shark is said to weight around 15,000 lbs and had to be lifted out of the water by two cranes.

Haj Qaism is reported to have purchased the fish for roughly $2,000 with the intent of leaving it on public display for two days and then ultimately selling the meat for profit.

One of the fisherman who brought the impressive fish in, Mehmood Khan Niaz, said, “It got stuck on one of the hooks. The rest of the ropes and hooks were tangled around the carcass. Its fins and tail were not functioning in the water because it was semi-conscious. It was alive for around three to four hours, after that it died.”

Though, if investigations into the shark’s actual cause of death ensue, many may be in hot water. The fishing of whale sharks is strictly prohibited under the Convention of International Trade in Endangered Species.

Whale sharks are the largest fish in the world.

Check out the video below of the 36 foot-long shark being lifted to shore.