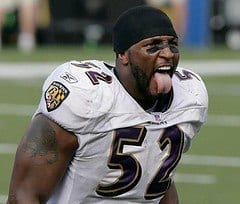 Wes Welker’s wife stirred up a controversy when she insulted Ray Lewis over Facebook after the Patriots loss on Sunday to the Ravens, but it wasn’t long before she had apologized for her comments.

The wife of New England Patriots wide reciever Wes Welker originally took to Facebook on Sunday, calling out future Hall of Fame linebacker Ray Lewis: “…if anyone is bored, please go to Ray Lewis’ Wikipedia page. 6 kids 4 wives. Acquitted for murder. Paid a family off. Yay. What a hall of fame player! A true role model!”

“I’m deeply sorry for my recent post on Facebook,” she said. “I let the competitiveness of the game and the comments people were making about a team I dearly love get the best of me. My actions were emotional and irrational and I sincerely apologize to Ray Lewis and anyone affected by my comment after yesterday’s game.

“It is such an accomplishment for any team to make it to the NFL playoffs, and the momentary frustration I felt should not overshadow the accomplishments of both of these amazing teams.”

Welker’s original comments were in reference to a controversy that surrounded Ray Lewis in 2000, when he was indicted on murder charges in the stabbing deaths of two men. Lewis eventually took a plea deal and came away with only a misdemeanor, but the event represents a dark spot on Ray Lewis’ legacy that remains in the back of the minds of many NFL viewers and players.

Wes Welker’s wife isn’t the first wife of a Patriots player to take their complaints to Twitter. In 2011, Wes Welker himself was the target of the wrath of Tom Brady’s wife, who was upset that Welker dropped two passes.