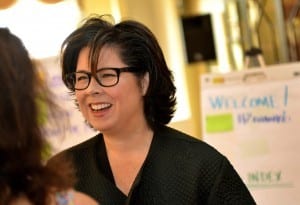 With a title like “Futurist,” one would expect that the job comes with a time machine. But Sheryl Connelly, Ford’s Futurist, doesn’t need artificial hardware to see into the future; she does it all on her own.  A graduate of Michigan State University with a Bachelor’s Degree in Finance (which she turned into a Master’s Degree and eventually a Doctorate), Connelly’s job is to identify trends that the automotive company can use in development of their future vehicles, but what makes it so difficult is the fact that she has to do it without looking at the automotive industry.

“I never look at cars. I never look at the automotive industry as a whole,” Connelly says. “Ford has plenty of subject matter experts in that arena. My job is to look outside of the automotive industry. I look at social, technological, economic, environmental, and political arenas all in the hope of trying to identify trends that will shape consumer values, attitudes, and behaviors.”

Imagine that a major car manufacturer needed you to identify the world’s next major trend in order to start designing automobiles that would acknowledge and embrace the trend. Looking back, America’s obesity epidemic seems likely the trend that would have been identified, and it was, but Connelly says that it’s not the biggest issue, called a “Megatrend,” she identified.

“Aging population is probably one of the greatest trends that we’ll face in our lifetime, both from a social and economic standpoint,” she asserts. “So if I’m talking to someone in corporate [offices] about aging, we might look at dependency ratios, which is something economists use to determine how many workers do we have supporting the non-working population.” That information gives both Connelly and Ford an idea of whether the economy will be growing or contracting, allowing the company to prepare and market to the population.

However, Connelly acknowledges that whoever she’s talking to will have a different response to the information she’s providing. “If I’m having the same conversation about aging with a designer or engineer, we would discuss the physiological changes that come with aging.” She identifies, “reduced response time, impaired vision, and limited range of motion” as byproducts of aging. “These are things that are [addressed] on the vehicle today. Active Park Assist is designed, in part, for people with limited range of motion.”

Not all trends are created equal, either. While aging and obesity are major trends, topics of discussion that can affect all types of businesses for extended periods of time, there are also trends that are shorter lived. Micro trends tend to last up to five years and are what Connelly focuses on when she publishes her expectations. Micro trends could last 10 or more years, though it’s rare. Information addiction started as a micro trend, for instance, but has emerged as a macro trend and is something that Connelly recognized years ago.

One trend that should be recognized was part of Connelly’s report for what to expect in 2014. In it, Connelly discusses the “tug of war” that is happening between a population who are using technology to take advantage of any and all information available to them. This is referred to as the “fear of missing out.” On the other hand, there’s another group who is determined not to live life staring into their smartphones or tablets, or becoming addicted to social media. This group, the “joy of missing out,” are determined to focus on the parts of life that matter and enjoy them.

It’s a trend that resonates particularly deeply with Generation X and Millenials, which Connelly has identified, with many turning away from social media and losing interest with being constantly connected. Additionally, in Ford’s 2014 Trend Report, Connelly recognizes society’s sudden need for a “digital detox” which is paired with the “slow movement.” In each of these instances the trend is to step away from what is now considered normal and simply slow down.

“Finding ways to disconnect is becoming increasingly difficult,” Connelly recognizes. Work, family, social, and news are just some of the outlets that we stay plugged in for. Ford even has their own technology, called “Sync,” that it uses to keep people involved, even when in the car. “Sync 3 [recently announced] will act even more like a smartphone, will be more intuitive and streamlined. But I think the feature that includes the Do Not Disturb button will become more used in the future, when people look to their cars for sanctuary.”

The hardest part of being a Futurist is recognizing that it’s “pain” that triggers the most change. Financial pain, triggered in part by gas prices or low wages, is something that has caused change recently, but how difficult is it to predict trends and changes in the future? Connelly likes to start at three years because that’s the typical period for a product development cycle, but it’s not unheard of to look 30 years in advance to try and prepare for the future.

With such a long period between design and when “the rubber hits the road,” as Connelly puts it, there’s always a chance that the trends identified will be unpopular, uninteresting, or obsolete by the time they’re implemented in Ford’s automobiles, and that’s what makes Connelly’s position so important to Ford. In a time when innovation is rapid and unpredictable, the job market is only starting to recover, and are people are living and working longer than ever, Connelly has never had a more difficult job in front of her. Not surprisingly though, in the recently released Trend Report for 2015, Connelly seems to have again identified the trends that will matter most to all of us.