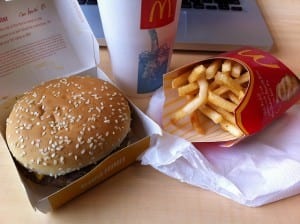 This statement might be understandable if it were said by an owner of a health food store or a farmer’s market. We’d be more surprised if they did sell junk food. So you’ll never guess who said it.

That person would be Don Thompson, CEO of McDonald’s.

I don’t eat a lot of fast food, but the last time I checked, McDonald’s food isn’t all that healthy. In fact, according to McDonald’s own nutrition chart, a Big Mac, small fries and a small drink is around 1020 calories. That one meal uses up half your daily recommended calories.

True, McDonald’s is offering healthier choices than they did even five years ago. Their menu is now filled with salads and wraps. But are they really that much healthier?

Then you have to tack on sides and drinks. But the official McDonald’s mantra is “We don’t sell junk food.”

If that isn’t bad enough, Thompson said that in response to a little girl who wanted him to change his marketing strategy.

“Something I don’t think is fair is when big companies try to trick kids into eating food that isn’t good for them by using toys and cartoon characters,” 9-year-old Hannah Robertson told Thompson. “If parents haven’t taught their kids about healthy eating then the kids probably believe that junk food is good for them because it might taste good. It would be nice if you stopped trying to trick kids into wanting to eat your food all the time.”

Hannah brought up a great point. McDonald’s may have “healthy” options on their menu, but none of them are Happy Meals. (They can get apple slices instead of fries, but what kid is gonna pick apples over fries?) And the toys in Happy Meals are essentially rewards for eating “not junk food.”

I don’t know who Thompson is trying to kid. McDonald’s is junk food, plain and simple. So the only truly healthy option McDonald’s has is to drive right by.