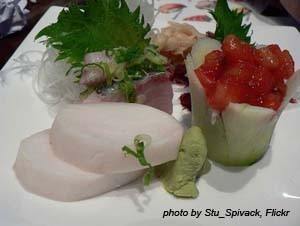 Just when you think there can’t possibly be anything to get you through Chem. 101, here’s a bit of inspiration! A couple of young reporters (Jenn Abelson and Beth Daley) at the Boston Globe put genetic testing to some good use. Rather than trying to create Frankin seeds or mutant sheep, these reporters conducted a five-month study to see if local restaurants were really serving up the fish that you ordered. Their findings showed that 48% of the time fish were mislabeled. Moreover, Escolar known as the ex-lax fish was commonly substituted for Albacore Tuna. Escolar is a very oily fish that is commonly linked to gastrointestinal issues. When you get this substitution in your Sushi, there is likely a nasty night on the horizon. You could end up having to toss your pants, your dorm room bedding and a few other things if you aren’t careful. Is there any way for the average person to tell Escolar from Albacore?

Luckily there is. Both Albacore and Escolar are sold under a very dubious term, “White Tuna” or “Super White Tuna.” Albacore is the whitest of the Tuna but it is still pink to tan and even the belly meat still has a distinct tuna aftertaste. Remember that smell in your lunch box when you packed a tuna fish sandwich on a warm day? That smell/memory should bring a slightly metallic flavor to your palate. Ok, not so appetizing but Tuna is absolutely preferable to the alternative ex-lax fish.

Another way to tell the difference between the two fish is to look at the color and texture of the raw fish itself. Albacore is a more translucent pinkish fish and the tissue is striated into layers. These little white stripes are what make Tuna flake into sections when it is cooked. If you are eating a pale fish labeled “White tuna” at a sushi bar and you don’t see a hint of pink and striations in the tissue this should raise alarm bells. Escolar in contrast is a dense white opaque (you can’t see through it) type of fish that looks more like a solid piece of flesh. It looks a little bit like giant clam used in sushi if you know what that looks like. Escolar is also extremely buttery or greasy on the palate.

Part of the reason that Escolar (Lepidocybium flavobrunneum) has become popular is the confusion with the buttery belly meat of the Tuna that is called “Toro”. Toro sushi is extremely sought after and wickedly expensive because sushi chefs often have to bid against one another to get it. Escolar, by contrast is a cheap fish and an easy fish to pass off on unsuspecting customers (AKA college students and any other dumb Americans). Bluefin Tuna (Thunnus thynnus) in Japan is labeled as “Maguro” while “Ahi” refers to its fattier relative the Yellowfin Tuna (Thunnus albacares). Albacore (Thunnus alalunga) is also known as Ahi or as “Tombo Ahi”. Albacore is the lightest in color, the mildest in flavor and the softest out of the three tunas.

The belly section of the fish is further classified into regular Toro sushi and “Otoro” sushi. Otoro is the most expensive cut on any tuna and this comes from the very underside of the fish. It’s oilier (high content of Omega-3 fatty acids) than regular sushi tuna and lighter in color. Sounds a bit like Escolar doesn’t it? However Otoro, like all Tuna is pink to tan and includes the striations in the flesh.

According to Wikipedia, Escolar has been banned in Japan because the fish is considered toxic. Escolar can cause diarrhea and worse. The buttery consistency of the flesh is caused by wax esters that build up in the flesh of the fish as it grows. Our fat loving taste buds mistake the wax esters for fat and send signals to our brain: “delicious!” so we eat more. The sad fact is that many humans have problems digesting the wax esters. This causes Keriorrhea, think “it flows right though you.” According to Medellitin’s blog and a number of hilarious comments, eating Escolar can also cause headaches, stomach cramps, nausea and vomiting. To think you were blaming it on the Sake! If stored improperly it can also lead to Scrombroid poisoning.

So if you like sushi but just can’t stand your Chem. lab look into some of the links above and I bet you will find yourself not only enjoying your sushi more but thinking that just maybe there is something useful in all this science torture you are enduring in college. As with most knowledge, what you don’t know can hurt you! Or at least leave you running for the bathroom.