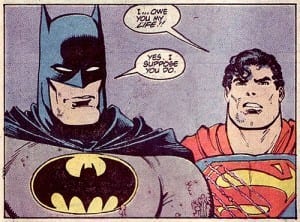 Dear God don’t screw this up

The big news at San Diego Comic-Con yesterday was the announcement of a Batman/Superman film. Though not much has been revealed about the film, it will be the first time in history for a Batman/Superman team-up to appear on the big screen.

Batman/Superman was more or less a surprise that came out of the Warner Bros/Legendary panel. Man of Steel director Zack Snyder told the Comic-Con crowd that there would indeed be a sequel to his Superman film. Following this, Man of Steel co-star Harry Lennix came on stage and read the following passage from Frank Miller’s classic comic book tale, The Dark Knight Returns:

Fans of the seminal Batman story will recognize that as lines of dialogue The Dark Knight said to Superman as he was beating him down at finale of The Dark Knight Returns. As Lennix finished his reading, an image of a new Bat-symbol superimposed with the Man of Steel logo was projected on the big screen, announcing the Batman/Superman project.

The Batman/Superman film will undoubtedly cause some confusion for the larger superhero movie audience, who may expect Christian Bale or even Joseph Gordon-Levitt to be back in the cape and cowl. Christian Bale is already a resounding “no” for future Batman films, and it’s highly unlikely that Joseph Gordon-Levitt’s John Blake would be the caped crusader in Batman/Superman.

Batman/Superman is clearly DC Comics’ battle plan to try to be on par with Marvel. It is probably a safer bet to launch their universe off with a Batman/Superman film instead of plunging head-first into a Justice League film.

Here is the official press release from Warner Bros:

“On the heels of the worldwide success of Man of Steel, director Zack Snyder is bringing together the two greatest Super Heroes of all time —Batman and Superman —for the first time on the big screen.  The announcement was made today by Greg Silverman, President, Creative Development and Worldwide Production, and Sue Kroll, President, Worldwide Marketing and International Distribution, Warner Bros. Pictures.

The current hit, Man of Steel, has taken in more than $630 million at the worldwide box office to date, and climbing.  Along with its star, Henry Cavill, the upcoming film brings back Amy Adams, Laurence Fishburne and Diane Lane.  The new Batman has yet to be cast.

Snyder is co-writing the story with David S. Goyer, who will then pen the screenplay.  Production is expected to begin in 2014, with an anticipated release date in Summer 2015.”