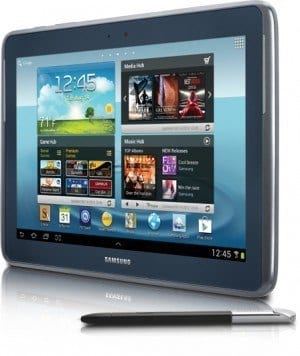 In terms of geographic personality, New England is prime for tourists to visit and see the beautiful landscapes that are available. From rocky coasts to beautiful fall foliage, New England is a unique treasure to our country. With that beauty though, there is a price. It’s difficult to litter the landscape with cell towers or repeaters, meaning that cell coverage is difficult for some of the major US carriers. With Verizon Wireless though, the network is surprisingly robust and paired with the Samsung Note 10.1, delivers an experience that is as consistent as it is impressive.

Boasting a 1.4GHz quad-core processor, the Note 10.1 handles any of your apps, whether they’re for business or pleasure, with ease. The 10.1-inch screen displays images up to 1080p with a steady rate of 30fps. This clarity and framerate allows for movies and games to display in surprising clarity, enhancing the overall experience for users. Like most tablets releasing today, there are also two cameras for use. The rear camera provides a much better picture at 5 megapixels and optional flash than the forward-facing one, giving only 1.9 megapixel. A better design option would be to put the better camera as forward-facing, as users will find that apps like Skype allow for video-calling and rarely do you see someone holding up a 10-inch tablet to take a picture and not think, “Wow, they look ridiculous.” If you’re not concerned with appearances though, the rear camera provides decent pictures and records in 1080p video.

The operating system of choice is Android 4.0 (Ice Cream Sandwich), but it works well with the “S Pen” that is included with the tablet. For students in particular, using the pen as a means of keeping track of important information in their ebooks or highlighting important pictures during research. As you use the pen a screenshot is taken of the area you circle, meaning students can focus on particular passages that they’re able to designate themselves and there’s no more annoying highlighter marks covering the pages. The pen also acts as a stylus, allowing using of all apps and easy navigation with it, reducing the amount of smudges and fingerprints on the screen.

An array of options are available for connecting devices to the Note 10.1, including Bluetooth and dual-band WiFi. WiFi direct is also an option, meaning instead of using your network connection — as reliable as it is — you can use WiFi hotspots to help save yourself from potential data charges. The battery is perhaps the most impressive thing about the device, totaling 7,000 mAh and allowing users a lengthy time of usage before a recharge is needed. Typically, with medium brightness, WiFi active and Bluetooth off, users can get heavy usage from the tablet for most of the day. This includes viewing videos, using applications, or simply reading ebooks. To summarize, the battery lasts a long time and take very little time to recharge back to 100%.

Finally, as previously mentioned, it is difficult to get a solid, sustained connection in certain parts of New England. Maine, New Hampshire and Vermont are very rural and go to great measures to sustain the beauty of natural landscapes. Cell towers help expand coverage, but also can become an eyesore on certain landscapes, creating a catch-22 when it comes to how to deliver quality service. Verizon Wireless, using CDMA technology, does a magnificent job of blanketing the area and providing a solid 4G LTE connection, even in some of the most rural places. Testing in Maine ranged from Portland to Bangor, including areas on the interstate (where the most coverage is, according to the map) and areas that were well off of it. In only rare circumstances did the 4G LTE connection fail, but in nearly every instance some form of connection was available.

The team of Samsung and Verizon Wireless work well together, giving users information and a way to reliably access it. The Note 10.1 is powerful and useful, providing access to hundreds of thousands of apps from the Google Play library. The pen makes navigation a snap, while the battery life ensures you’re able to consistently use the device without the constant worry of running low on juice. For anyone looking to upgrade or enter the world of tablets, the Verizon Wireless/Samsung Note 10.1 partnership is worth investigating.