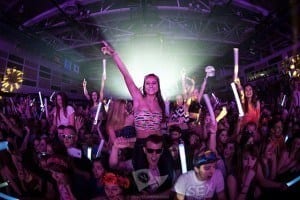 Krewella headlines with their explosive sets

Karmaloop and EMUZE have banded together to bring yet another Verge Campus Tour that will turn college campuses, all over the country on it’s side with the amount of energy that will be spewed during each night. This year the headliner will be the incomparable EDM trio, Krewella, who will be joined by Logic and Radical Something to make that a night that students won’t forget.

The Verge Campus Tour will be taking over the Spring this year with stops in 12 states, 22 cities and a whopping 27 colleges, in only 30 days.  Hailing from Chicago and consisting of a trio of three siblings, Krewella rode the EDM wave and shot into super stardom with their megahit “Alive” and continues to churn out hit after hit, skyrocketing to the top of the charts. Their sets are always boasting with tons of high-frequency energy with their progressive dubstep sound.

Sir Robert Bryson Hall II, who also goes by the name of Logic has taken by storm with his infectious raps and has gained notoriety just off of the momentum of his popular mixtapes , Young, Broke and Famous and his Young Sinatra trilogy. His freshly released EP While You Wait is further finalizing his spot as a coveted MC and fans will get a taste of his eclectic live show during the tour.

Radical Something is a genre bending group from California that fuses the sounds of hip-hop, reggae and pop for a smooth sound. Composed of Loggy, Josh Cocktail and Big Red they have gained a cult following with their albums We Are Nothing and Ride It Out formulating some fan favorites.

To check out the full schedule of the tour go on the Verge website HERE.