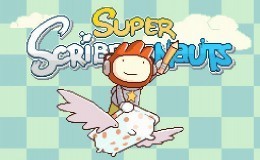 Addicting, quirky, and daringly innovative, Super Scribblenauts is everything the original should have been

The original “Scribblenauts” was one of the most interesting games of 2009, a brilliant combination of daringly innovative gameplay and quirky art direction. It bestowed upon gamers the power to conjure items out of thin air by merely spelling out their name, and “Scribblenauts’” vocabulary was stunningly expansive. The items were supposed to be used to solve puzzles, but equally enjoyable was spawning random objects, like a cat, T-Rex, and nuclear bomb, and seeing how things played out. Unfortunately, the truly abysmal, touch-based controls made things frustrating –so frustrating, in fact, that it marred the game’s appeal in the eyes of most critics.

Developer 5th Cell has clearly learned their lesson, though, because the sequel, “Super Scribblenauts”, is everything the original should have been and more. First and foremost, yes, the controls have been fixed. Instead of tapping the screen with your stylus in order to move the game’s protagonist, Maxwell, you can use the directional pad. Even though “Super Scribblenaut’s” doesn’t have quite as much perilous platforming as its predecessor, being able to accurately move Maxwell where and when you choose truly rectifies virtually every one of the original “Scribblenaut’s” more glaring flaws.

The goal in “Super Scribblenauts” is the same: collect the “Starite” in each level by achieving a certain objective. Sometimes this means navigating traps, and other times it means helping a character get from point A to point B without getting killed. Using your item-conjuration abilities is the key to solving the puzzles of “Super Scribblenaut”, and it’s an absolute blast trying to figure out what suitable objects you can use. There are multiple solutions to each problem, and the game even forces you to experiment with new items by making you clear stages multiple times using objects you haven’t used before.

In “Super Scribblenauts”, creativity is everything, particularly since you can now use adjectives to modify the objects you create. Want to spawn a checkered cow or a spiked bowling ball? You can totally do it. What you actually end up doing with a rainbow bazooka or zombie robot, however, is the tricky part.

Missions range from super simple to ridiculously complex, but fortunately, the game is structured in a non-linear fashion, allowing you to take a break from an especially difficult puzzle and try a different one. There’s also a hint system implemented for gamers who get stumped, but rest assured, “Super Scribblenauts” doesn’t do a whole lot of handholding. It might point you in the right direction, but at the end of the day, it’s up to you to find the answer.

The game comes packed with dozens of awesome levels that will keep you busy for several hours, but even once you’ve completed them all, it’s still fun to go back and beat the game all over again, only using different items this time. On top of all that, “Super Scribblenauts” has a robust level editor which you can use to create your own puzzles and share them with other gamers through the Internet.

If you loved “Scribblenauts” in spite of its flaws, you will adore “Super Scribblenauts”. Everything that was wrong with the original has been fixed, and the copious amounts of new features and brand new puzzles make it easily worth the price of admission. If you wanted to love “Scribblenauts” (and, honestly, there’s no reason why you would not have) but couldn’t because of the broken controls, pretend like the first installment never existed and get ready to experience the weird world of “Scribblenauts” the way it was meant to be.