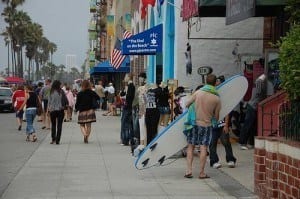 A suspect has been arrested and held on $1 million bail

The Venice Beach boardwalk in Southern California is normally a lively place for tourists and locals to eat, shop and explore. On Saturday, this simple enjoyment turned deadly.

A man driving a dark black sedan drove through the Venice Beach boardwalk, weaving around poles designed to block traffic and plowing into pedestrians. The act of violence killed one and injured 11 others. The car involved was found abandoned.

The woman killed was 32-year-old Alice Gruppioni. She was an Italian woman on her honeymoon.

One of the 11 others hospitalized after the Venice Beach boardwalk crash was in critical condition. Two were in serious condition, and the remaining 8 suffered minor injuries ranging from broken bones to soft tissue damage, according to Los Angeles Fire Department spokesman Brian Humphrey.

According to witnesses, the driver intentionally sped up and aimed for people on the boardwalk. Bystanders were quick to assist the injured and police arrived just a few minutes after the incident. The incident itself and the bloody, destructive aftermath can be seen in videos that have surfaced showing the vehicle driving into the boardwalk, and the crowds of people rushing to help the injured.

The Los Angeles Police Department has arrested a man in connection with the crash. 38-year-old Nathan Campbell reportedly turned himself in to a Santa Monica police station, admitting that he was involved. He is being held on $1 million bail, and no information has been released regarding motives. It is not known whether drugs or alcohol were involved.