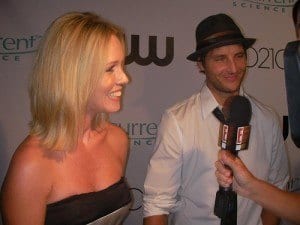 Jennie Garth, known for her roles on 90210 and husband Peter Facinelli, who plays a Cullen in the Twilight series, have decided to end their marriage of 11 years.  Although the couple has not given a reason for the divorce, there have been various speculations and the most widely believed is that Facinelli has not stayed faithful.

Jennie Garth apparently suspected that something was going on, as the couple had started to drift apart.  Perez Hilton quoted a source that said, “Peter had been seeing another woman for quite some time…they tried to make it work for the sake of their children and Jennie played housewife for as long as she could but finally had enough.”  It is rumored that Facinelli had met a woman while filming Breaking Dawn in Vancouver.
The 39-year-old Jennie Garth has recently been filming a reality show, “Jennie Garth: Little Bit Country” which is about moving the Garth family to a farm in California, set to debut next month on CMT.  Reports assume that the show will feature their marital troubles.

Jennie Garth and Peter Facinelli have three daughters together, 14-year-old Luca Bella, 9-year-old Lola and 5-year-old Fiona.  The couple released a joint statement that said, “While we have decided to end our marriage, we both share the same deep love and devotion to our children.  We remain dedicated to raising our beautiful daughters together.  We ask for privacy and respect during this time.”

Jennie Garth met Peter Facinelli the same year she divorced from her first husband, Daniel B. Clark, in 1996.  They met while filming a TV movie, “An Unfinished Affair,” and married in 2001 at Our Lady of Mount Carmel Church in Montecito, California.  Tori Spelling and Tiffani Thiessen, co-stars with Jennie Garth on 90210, were bridesmaids.