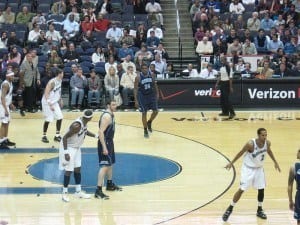 The Utah Jazz are going to the playoffs. Tuesday’s 100-88 win over Phoenix secured the team the Western Conference’s last playoff spot.

Paul Millsap’s game-high 26 points and 15 rebounds certainly helped secure the Utah Jazz a spot. Also notable was Al Jefferson, who returned to the game after getting two stitches over his left eye. The player scored eight straight points late in the fourth quarter to secure Utah’s win over the Phoenix Suns.

“It’s good to make people eat their words,” Jefferson said of those who doubted that Utah Jazz would make playoffs. “That’s what we did. Now it’s time to go and shock the world.”

Many thought the team was too young and inexperienced to get a spot at the conference. The team is led by career non-stars and NBA castaways with a coach who has coached only 92 games total in his career.

The young team includes seven of 14 players ages 26 or younger, including four whom are 21 or younger.

The victory halted Utah’s seven-game losing streak to the Suns, dating back to March 2010 and also marks the 25th playoff appearance in Utah Jazz history.

“Seven long years, seven long years since I’ve been in the playoffs,” Jefferson said. “It’s a great opportunity. A lot of people counted us out. It’s a great group of guys and everyone on our team deserves it.”

“It’s a tremendous achievement for a group of guys that laid it out there every night,” Utah Jazz coach Tyrone Corbin said. “Whatever happened, good or bad, they stayed together. That’s the most rewarding thing — to see them rewarded for all the hard work they put in.”