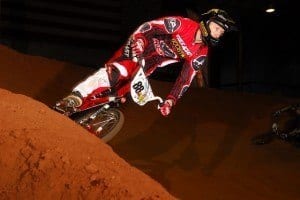 Kyle Bennett, a member of the 2008 U.S. Olympic BMX team, died Sunday morning in a single-car accident. The cyclist was 33.

The accident occurred near Kyle Bennett’s home on Conroe, Texas, at about 2:15 a.m. Sunday. According to the Montgomery County Police Reporter, Bennett was driving at high speed in response to a call from his fiancée that her car had been broken into, and he drove off the road and into a ditch, hitting an iron gate. Kyle Bennett was reportedly not wearing a seat belt and was pronounced dead at the scene.

Kyle Bennett was a three-time world champion of BMX and held numerous other championship titles, as well as being part of the first-ever U.S. Olympic BMX team. He is survived by his fiancée and his 4-year-old daughter, Kylie.