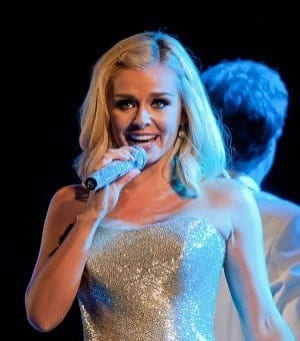 Katherine Jenkins, who will be on this season of Dancing with the Stars, has announced that her concert in Afghanistan is postponed.

Jenkins recently had to cancel a concert for soldiers stationed in Afghanistan, according to the Huffington Post. The star had originally planned to perform in 2010, but her performance was canceled after her plane was grounded due to weather conditions.

In November, Jenkins was able to perform for soliders returning from Afghanistan, but has yet to re-schedule the trip there. Now, the trip is looking more and more unlikely to happen soon, due to Jenkins’ role on the 14th season of “Dancing with the Stars.”

Jenkins twitted on Tuesday:
“Sadly we tried again (to get to Afghanistan) but its not going to happen. So sorry not to make it out to you but we really REALLY tried!”

Jenkins’ career high-lights include selling the most opera albums in the UK in 2004, which prompted Universal to offer her a six-record pact worth more than $1.5 million, according to Radar Online and having seven  studio albums, two compilations and 11 singles.

Jenkins will be joining celebrities like Melissa Gilbert of “Little House on the Prairie,” The View’s Sherri Shepherd, singer Gavin DeGraw and Gladys Knight.