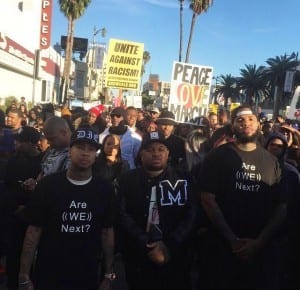 From protests in Ferguson, Missouri to the streets of New York City all the way to Los Angeles, celebrities are taking a stand on the front lines to share their voice on real issues facing our country.

Most recently, rapper Tyga, The Game and DJ Mustard have joined forces after taking part in the #MillionsMarchLA protest against police brutality that took place on Dec. 27.

Their participation comes after recent cases raising concern regarding police brutality and the loss of innocent lives that seems to flood mainstream media as of late.

Last week, The Game turned heads after commenting on two police officers slain in Brooklyn. He commented, “I guess y’all can’t breathe either,” before clarifying that his comment “suggest that #AllLivesMatter.”

Protesters took to the streets of Fairfax and Miracle Mile districts with Tyga, The Game and DJ Mustard beside them for #MillionsMarchLA which shut down traffic as protesters marched with signs and chanted for injustice to those who have died or been harassed by police forces nationwide. The march is similiar to the Millions March protests that occured a few weeks back in New York City and Washington D.C.