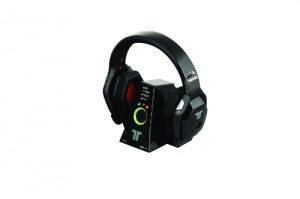 With the massive success that online gaming has seen in the last few years, it’s no wonder that gaming headsets have seen the results, too. In games where you need to rely on sight and sound to be successful, a headset gives you an advantage over all competitors. Finding a decent headset is the challenge, though. With so many options available to gamers, it can be a daunting task to find one that meets a players requirements of quality, comfort and durability. Tritton has been a major player in the gaming headset market for some time and recently released their new Warhead 7.1 for Xbox 360, a hulking beast of a headset that provides amazing audio, simple installation, and removes the most annoying part of every headset: the cords.

Wireless is a term that gets tossed around haphazardly when discussing headsets, but the reality is that no headset has been truly wireless. Typically players will have wireless audio streamed to their ear holes, but game and party chat still requires a cable to run from the headset to the controller.  This is due to Microsoft’s patent on their wireless technology and their refusal to license its use to a third party; that is, until now.  Tritton has worked an agreement with Microsoft to make the Warhead 7.1 completely wireless, meaning all audio, chat and game, is delivered and sent from headset itself, no strings attached. Literally.

The concern is the quality of the audio; in terms of wired vs. wireless, typically the better of the two comes with a cable dangling from your ear. Once you decide to don the headset itself, you’ll find that Tritton doesn’t slap a claim like ‘7.1 surround sound’ on the box without merit. The audio is brilliant and surround sound lives up to the claim. In games like Call of Duty and Battlefield, enemy soldiers are easily heard even through gunshots and explosions while other genres deliver as well. NBA 2K13 features squeaks of player sneakers on the parkay floor and the clangs of opponent misses, while clearly relaying the swoosh of the net as you sink an 18-foot jump shot in Kobe’s face.

Games aren’t the only use though and as Microsoft yearns to make your Xbox 360 the hub of your entire entertainment catalog, the Warhead 7.1 provides additional modes that highlight the best things about your whatever experience you crave.  For movies and music, a simple button press changes the EQ settings to highlight the audio that’s needed to enhance the experience depending on your own personal preferences.

A lot can be said for recognizing what users need versus what users want. To sell the Warhead 7.1, Tritton needs to provide a headset, a mic, installation cables, and the audio base itself (to deliver the 5.8 gHz signal to the headset). Not content with simply offering the minimum, the addition of extra pack-in accessories takes into account what users want. An optical audio cable is included for those with the ability to use one — an option not typical in the gaming audio world. And not one, but two batteries are supplied which are easily transferrable. One sits in the audio base to charge, while the other provides up to 12 hours of continuous streaming before needing to be replaced.

Even the engineering of the headset has been meticulously crafted to allow seamless transition and easy accessibility to each button and knob. Game and chat volume are controller separately, each knob appearing on a different side of the headset, respectively. In addition to the simple up and down motion, they also push in, allowing for quick muting of game audio or giving players the option of hearing themselves talking through the monstrous 50mm speakers. Comfort was also a big concern, with Tritton crafting headsets that sit both on and over the ears, with the former causing stress issues after long play sessions. Despite the heft of the Warhead 7.1, the over-ear decision coupled with the tight headband makes the comfort a non-issue until 10 or 12 hours of gameplay, at which point the leather-like earpads coupled with the constant pressure applied to your head will start to grow uncomfortable.

True wireless is a wonderful evolution to gaming audio and by partnering with Tritton, Microsoft has selected a partner with a fantastic reputation. The Warhead 7.1, also available with a Halo 4 motif, combines style and quality to give users an experience that enhances games, music, and movies in ways that your television speakers and most surround sound systems can’t compete with. Retailing at a hefty $299.99, the price may turn some away. But those who are willing to approach it as an investment will quickly find that what’s in the box far exceeds the price.