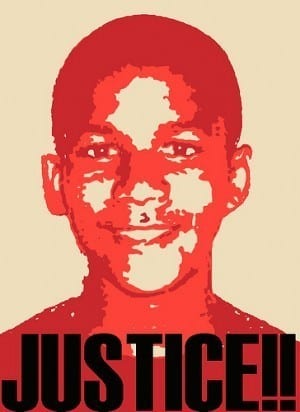 ‘What, are you following me for,’ would be his last recorded words

The Florida community rallied support on Monday for Trayvon Martin and his family outside the Seminole County Courthouse.

The 17-year-old sparked a national outrage, in what has come to be known as the Trayvon Martin 911 call, when he told a friend he was being followed. “He said this man was watching him, so he put his hoodie on. He said he lost the man,” a female friend of Trayvon Martin told ABC. “I asked Trayvon to run, and he said he was going to walk fast. I told him to run, but he said he was not going to run.”

George Zimmerman, the man that promopted Martin to call, shot and killed the 17-year-old boy.

More than 430,000 people, including director Spike Lee and musician Wyclef Jean, signed an online petition on Change.org, calling for the arrest of the shooter, George Zimmerman, who claims to this day he was acting in self defense.

The FBI announced Monday that they will open an investigation. The Treyvon Martin 911 call was confirmed by ABC, and he did in fact speak with a female friend before being killed. “Trayvon said, ‘What, are you following me for,’ and the man said, ‘What are you doing here.’ Next thing I hear is somebody pushing, and somebody pushed Trayvon because the head set just fell. I called him again and he didn’t answer the phone.” Those would be the last words recorded by the Treyvan Martin 911 call.

The Orlando Sentinel reported the shooter, Zimmerman, called police 46 times in the months leading up the Trayvon Martin shooting. The Seminole County Sheriff’s Office released six of the calls made by Zimmerman- who reported in four of those calls of “suspicious persons” who were described as black males around the area Trayvon was killed.