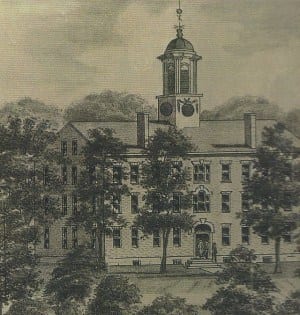 Every August, college campuses across the country are packed with families moving eager students into their new dorms. Unless you were lucky enough to move into a brand new building with state of the art air conditioning and a new mattress, you might remember the eerie feeling of taking over an empty room that has been called home by dozens of students before you. The thumbtack holes are still on the walls and the mysterious stain on the carpet will keep you and your roommate guessing until you add stains of your own to the room’s history. It’s almost like the ghosts of previous tenants still haunt the dorms they left. Once some posters of your own are up and the dorm starts feeling like home, college campuses start feeling much more like “Animal House” than a horror movie by the time Halloween parties on are on the mind, but some campuses have haunts that rival Universal’s Halloween Horror Nights. Next time you’re scared to death by that physics final, think of the five most haunted college campuses and be glad your campus doesn’t have more to be afraid of…

Almost every college tour guide has a ghost story to tell prospective students, and the better the story the more likely it is to stick around long past the storyteller’s graduation. Of all the storytellers, however, no one tops Edgar Allen Poe when it comes to hauntings, and his old school starts off our list. A Confederate surgeon named Dr. Green is said to haunt the library to which he donated all of his books, and his ghost moved with the books when the library transferred from the University’s famed Rotunda to Alderman Library. Apart from other haunts on campus, Edgar Allen Poe left a scary note on his windowpane when he was forced to leave U.Va. due to debt…

“O Thou timid one, do not let thy

Form slumber within these

The ghost of an awful crime.”

Student loans are scary enough, but how would you like to find a note like that on your first night in a new dorm? If you want to learn more, the University Guide Service at U.Va. even offers a Ghost Tour of the campus.

Waking up to the sounds of a drunk roommate stumbling into the dorm well after midnight is pretty common in college, but students at Fordham University’s Bronx campus have to worry about something else that goes bump in the night. Students living in Finlay Hall have told of frozen hands grabbing their throats late at night—a reminder that Finlay Hall was built on top of a morgue. The ghost of a young blonde also apparently haunts the showers in Keating Hall, so freshmen have more to worry about than running into their new crush while wearing only a towel. With any old college campus, ghost stories are inevitable, but Fordham might seem eerily familiar to fans of horror because some scenes from “The Exorcist” were filmed at the university.

When it comes to haunted campuses, it’s all about location, location, location. Cal State’s Channel Islands campus has only been open since 2002, but from 1936 to 1997 the campus was home to the Camarillo State Mental Hospital. Ghosts and strange voices apparently haven’t learned that the campus is now an academic institution rather than an insane asylum, and the signature bell tower is a regular site for paranormal happenings. If living in an old asylum isn’t cause enough to call CSUCI haunted, watch “The Ring” and keep an eye out for scenes shot on the campus.

Rivalries are popular on college campuses across the country, but Pennsylvania Hall at Gettysburg College was held and used as a hospital by both Confederate and Union troops during the Battle of Gettysburg. Med students know that Civil War era hospitals were more like butcher shops than modern operating rooms, so it should come as no surprise that the ghosts of bloody doctors still haunt Pennsylvania Hall’s basement. College romances can get dramatic, but men should also fear Glatfelter Hall. A young couple made a suicide pact to jump from the bell tower, but the boy bailed after the girl jumped. Her ghost—only visible to guys—haunts the bell tower, trying to lure a potential suitor to jump from the tower in her cowardly boyfriend’s place. After checking out the ghostly version of Romeo and Juliet at Glatfelter Hall, head over to the Kline Theatre at Brua Hall where the General haunts backstage.

Ohio University in Athens, Ohio has been universally dubbed the most haunted campus in the United States (if not one of the most haunted places in the U.S. period). From the girl’s basketball team that died in a bus crash haunting Washington Hall to a student named Laura who fell to her death from the fourth floor of Crawford Hall and now stops the Bob Marley song “Laura” from playing in her old building, paranormal experiences are pretty much a prerequisite for graduation. The real haunt at OU, however, is room 428 in Wilson Hall. Ohio University stands in the center of a pentagram of Athens cemeteries, and Wilson Hall just happens to stand at the very center of that pentagram. Exact explanations of the events that have occurred in room 428 are unavailable, but Ohio University officials have sealed off room 428 and dubbed it uninhabitable for students. If you never got off the waitlist for Ohio University’s freshmen class, the violent death of a student in the 1970s practicing a satanic ritual in 428 might be to blame for the lack of an extra bed. Those missing out on ghost stories while an undergrad will have to settle for OU’s killer Halloween party.