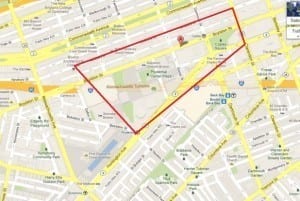 Three people were killed and more than 130 injured in two explosions that took place at the finish line of the Boston Marathon on Monday afternoon.

The two explosions took place around 2:50 p.m. EST. Bomb crews confirmed the source of the explosions to be crudely made bombs, a source told CNN.

The same source told CNN that the FBI considers the bombing a terrorist attack, although the source was adamant that officials didn’t know whether the group was foreign or domestic.

Rick DesLauriers, FBI Special Agent in Charge of the Boston field office, told reporters around 7:52 EST that the FBI was taking charge of the investigation.

A law enforcement advisory circulating around the area warns people to be on the lookout for a “dark-skinned or black male”, possibly with a foreign accent. The advisory claims the man, wearing a black sweatshirt and a backpack, was seen trying to get into a restricted area about five minutes before the explosions.

Reports originally circulated that a Saudi national had been placed in custody in connection with the marathon bombings. It was confirmed by CNN that the several policemen were guarding the man at a hospital, where he was receiving treatment for a leg wound. But officials said that he was not in custody, and they could not comment on whether the man is involved in the investigation.

According to the Los Angeles Times, officials are also “desperately seeking” a Penske rental truck seen leaving the area where the explosions took place.

Dr. Allan Panter, who was near the finish line when the bombs went off, told CNN that he treated victims on the street in the immediate aftermath of the crash.

“I saw at least six to seven people down next to me,” he said. “They protected me from the blast. One lady expired. One gentleman lost both his (lower) limbs. Most of the injuries were lower extremities. I could not figure out why the young lady had expired. I could not find any injury on her thorax.”

“We’re still in the investigation stage at this point,” Obama said. “But I just want to reiterate we will find out who did this and we will hold them accountable.”