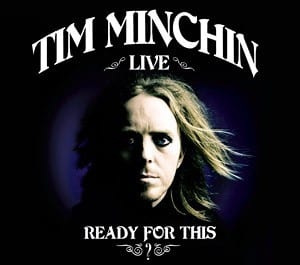 Tim Minchin rocks the stage in his new DVD/CD set

Tim Minchin has been a staple on the comedy scene in the U.K. and Australia for years, but if his DVD/CD set “Ready For This?” are any indication, he’s sure to become a household name in the U.S. in no time.

“Ready for This?” was recorded in October 2009 during Minchin’s sold-out run at the HMV Hammersmith Apollo theater and encapsulates perfectly Minchin’s raucous yet refined style. Minchin impressive vocals and astounding piano playing give his hilarious songs a twist. The impressive production value of his songs and performance make his jokes even funnier and his show even more enjoyable.

Minchin’s songs run the gamut,from satiric (“The Good Book”), to silly (“Bears Don’t Dig on Dancing”), to surprisingly sincere (“White Wine in the Sun”) with each offering something slightly different to the viewer/listener. Like other excellent comedians, Minchin earns laughs by playing on the unexpected in a way that doesn’t feel forced or predictable. The best example of this might be Minchin’s three-part song “Confessions,” particularly the first part entitled “Feminism” where he sings sincerely, “I’m ashamed on behalf of my sex for making women feel like objects…” promptly following it up with a giddy almost sheepish confession of “I love boobs, though.”

“Ready for This?” also comes with a live CD featuring Minchin performing at the Queen Elizabeth Hall with band accompaniment and a url where fans can download a pdf version of Minchin’s songbook featuring all the songs performed at the HMV Hammersmith Apollo theater.

Tim Minchin has been described as a piano-bashing, icon-trashing, nerd-brained, rock-voiced, hedgehog-haired, tight-trousered philsopher-comedian…but no compound adjective or noun can quite do him justice. Minchin’s hilarious, clever and, yes, touching songs need to be experienced in order to be appreciated. So, are you ready for this?

Purchase “Ready for This?” here or on Amazon, and find more information about Tim Minchin here. For a peek of what is in store for you, check out his appearance on “The Late Late Show with Craig Ferguson” below.