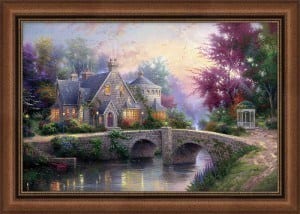 The popular artist’s April death saddened many, now the cause has been revealed

Thomas Kinkade is again in the news as details regarding his shocking passing at the age of 54 surface.

Thomas Kinkade battled alcoholism in his life as an artist and unfortunately suffered a relapse before his April 6 death as a result of a lethal cocktail of alcohol and the prescription drug Valium, also known as Diazepam, according to the Santa Clara County Medical Examiner’s Office.

The county’s lead medical examiner, Dr. Joseph O’Hara, stated that the famous artist’s death was accidental and caused by “acute ethanol and Diazepam intoxication.”
Diazepam is a muscle relaxant that is often used to treat problems resulting from alcohol withdrawal. The drug is also prescribed to treat anxiety, muscle spasms and seizures, according to the U.S. National Library of Medicine.

The Medical Examiner’s Office noted another contributing factor in the death of Thomas Kinkade, the health of the 54-year-old-artist’s heart. The report stated Kinkade suffered from “hypertensive and atherosclerosis heart disease.”

Patrick Kinkade, the artist’s brother, had previously stated that his brother battled alcoholism for years but in the months leading to his death had been sober. The artist’s brother told the San Jose Mercury News that years of harsh criticism and personal attacks, along with the split from his wife and daughters, had drove Thomas Kinkade to battle with alcohol addiction.

In 2010, Thomas Kinkade was arrested on suspicion of drunk driving before later pleading no contest.

The artist apparently suffered a relapse the night of his death, April 6. The dispatcher that sent emergency personnel to the artist’s Monte Sereno, C.A. home reportedly stated, “Apparently he’s been drinking all night and not moving.”

The dispatcher made this comment after Kinkade’s girlfriend, who lived at the home with him, dialed 911 and reported the artist was unconscious and not breathing. Thomas Kinkade was pronounced dead at the scene.

Patrick Kinkade has said that the artist had been painting religiously in his studio in the months before his death. There is no known reason for the artist’s fatal relapse.