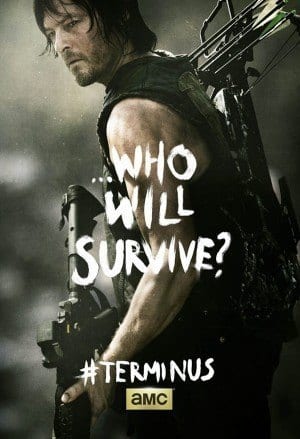 “It’s their world. We’re just living in it.”

Warning: this overview of The Walking Dead Season 5 contains character and plot spoilers.

Season 5 of The Walking Dead continues the ongoing saga of Rick’s group as they navigate the post-apocalyptic world. Season 5 began on October 12, 2014 and ended this Sunday on March 29, 2015.

Overall, there hasn’t been a consistent setting in season 5 of The Walking Dead as the group travels around looking a new place to settle. What seemed like it would be a season-long arc (Terminus) turned out to end quicker than expected. Eugene’s story about DC turns out to be a tale created to make the group keep him safe. The hospital arc also speeds by quickly before ending with Beth’s death in the mid-season finale.

In the second half of Season 5 of The Walking Dead, Rick’s group flounders and mourns for a couple of introspective episodes before stepping into Alexandria, a small town that has been ridiculously lucky from both walkers and awful humans. At first, the small and intimate community of Alexandria appears to be a piece of the world in that resembles the way the world once was. The old normalcy.

As Rick and the Family adjust to their new homes in the little town, they struggle against their inner demons and also the dangerously sheltered mindset of Alexandria’s inhabitants. Clashes on how to run a post-apocalyptic town between Rick’s hardened group and the sheltered and ignorant inhabitants of Alexandria quickly lead to ugly events down the road. Rick tries to convey the harsh reality of the outside world that makes heightened security measures necessary, but Deanna resists such measures, wanting to focus on promoting the pre-apocalyptic ways of life within Alexandria.

The parallels between the Hospital and Alexandria also reveal an important theme in this season: to preserve a fragile peace holding together a community with its own tensions, the leaders choose not to acknowledge certain acts of cruelty as long as it doesn’t the community as a whole. Both leaders are willing to let injustice slide as long as those deeds stay below the surface.

In order to keep her subordinates happy, Dawn, the leader of the police force that runs the Hospital, looks away while police officers under her command coerce women into performing sexual acts for them, including Beth.

Deanna, the leader of Alexandria, turns a blind eye to domestic abuse by Pete, who beats his wife frequently during a drunken rage, even when Rick confronts her about it.

Living with Trauma, Adapting to the New “Normal”

Throughout the season, especially during the two introspective episodes (episode 9, “What Happened and What’s Going On” and episode 10, “Them”) between the end of the hospital arc and the beginning of the Alexandria arc, the trauma from the loss of beloved friends and family catches up to a few characters, including:

Rick has come a long way since the idealistic cop he was back in season one. He is completely devoted to his “family”, but he has had to make harsh decisions in which he had to kill people in order to save himself or his group. This season, we see a more pragmatic Rick, one whose actions in Alexandria imply a parallel between him and Shane on the surface, such as his attraction to Jessie, a married woman with a son, and his thoughts of killing Pete. However, Rick still gives people a chance to prove themselves before making a decision to kill. And while Carol is comfortable with deception, Rick comes clean to Michonne in the finale, showing that he still trusts her even after she punched him during his bloody and public speech.

This kid learned to wield a gun at a young age. Had to put a bullet in his mom. Put him in a room of teenagers and he turns into an awkward teen. He’s attracted to a teenage girl named Enid who had been accepted into Alexandria recently. “It’s their world. We’re just living in it,” she told Carl.

Tyreese, who has trouble accepting the harsh rules of survival in the new world. As we see in his refusal to kill Martin (one of the people-eating folks from Terminus) even when it was in the group’s best interest, Tyreese can’t bring himself to play by these new rules, and ultimately his failure (via refusal) to adapt to the new rules is his downfall.

Daryl, while at home in the woods and on the road, sticks out like a sore and gritty thumb in Alexandria. With his hunting skills, great sense of direction, and a distaste for arbitrary rules of “proper society”, Daryl feels suffocated by the stuffy and conservative town of Alexandria. And he hates baths and showers. He takes off on recruitment runs with Aaron, who is also an outcast in town because of his homosexual relationship with his partner Eric.

Poor Noah. He had so much potential as a character, and that’s part of what made his death hurt so much. Being a slave in the Hospital had sheltered him from some of the uglier parts about surviving outside, as we saw in his haunted gaze at the dog leashes when the group converts a group of dogs-gone-wild into lunch.

In her quest to fit in with Alexandrian society to insure the Family’s long-term well being, Carol plays the role of a domestic and harmless housewife, describing herself as the “den mother” of the group. Behind the scene, she and Rick discuss the possibility of taking control of Alexandria by force. Carol this season shows us how far she’s evolved from the meek and mouse-like Carol of season 1. Now, she is the master manipulator, the behind-the-scenes-queen, and the cookie monster of little Sam’s nightmares.

Earlier this season, Sasha lost her friend-and-potential-love-interest Bob and brother Tyreese. Even before Rick’s group reached Alexandria, Sasha was exhibiting signs of restlessness and pent-up anger. The clash between the brutal outside world and the stuffy and mundane Alexandrian life infuriates her, perhaps filling her with bitterness and a bit of jealousy as she looks at these sheltered townspeople complaining about the littlest things compared to the large scope of surviving in the unstructured environment. In her restlessness, she controls the watchtower and snipes any walkers who venture near the walls of Alexandria. Sasha’s symptoms of PTSD come to light this season.

Glenn has stepped up this season by taking leadership of runs in Alexandria. He stands up to Aiden when Deanna’s son acts like a prick and a moron after a run. He has been a relatively minor character, but this season has given him the spotlight by throwing him into situations in which he’s had to make quick decisions to ensure the team’s survival. No one had died on Glenn’s watch…until Noah. Glenn showed us how strong his commitment is to keeping the group (including Alexandrians) alive by not killing Nicholas out of vengeance after Noah’s death or even after Nicholas’ attempt to kill him. I was rooting for Nick to die, to be honest.

Out of the group, Michonne is the most eager to make Alexandria work. The symbolism of her hanging up her sword marks her willingness to let go of the tragedies that she has endured to pursue a more peaceful life within the town. However, we see her pick up that same sword again during the finale with a resigned countenance.

Abraham has received some awesome one-liners this season, such as “Motherdick” and his season-finale lines, “Simply put, there is a vast ocean of shit that you people don’t know shit about. Rick knows every fine grain of said shit. And then some.” Abraham’s scene in which he stared at himself in front of the mirror after throwing water on his face seemed to me like he was uncertain of his purpose in this town, perhaps feeling a bit lost without a purpose, which Eugene’s scientist story had given him. He immediately perks up when a group of walkers almost kills an Alexandrian who was abandoned by her crew.

Like Rick’s group, Father Gabriel has had to do some awful things to survive. Unlike Rick and his group, doesn’t accept that he has to do these things to survive. He locked out his congregation and listened to their screams as they pounded on the doors. He has trouble reconciling his role as a spiritual guide for people and his guilt for abandoning the people that he, as their spiritual leader, was responsible for. In the finale, we see him projecting his own feelings of guilt onto Sasha.

Morgan’s back, and he has developed some major martial arts skills. What will he be up to?

Episode 10: Them (Group stays in barn on a rainy night.)

Episode 11: The Distance (Beginning of Alexandria.)

Episode 16: Conquer (Surprisingly, no one from Rick’s group dies. Yay!)