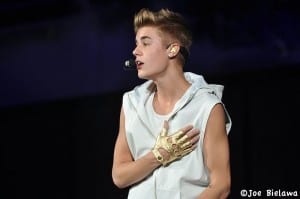 On March 14th, Comedy Central held their roasting series, with 21-year-old Justin Bieber in the coals. The Canadian pop star, whose career has been plagued by scandals, sat by as he was picked apart by various celebrity stars. Kevin Hart was the host for the event, and fellow roasters included Jeffery Ross, Ludacris, Chris D’Elia, Natasha Leggero, Shaquille O’Neil, Hannibal Buress, Snoop Dog, Will Ferrell as Ron Burgundy, and even Martha Stewart.

Throughout the night, Bieber was verbally attacked, in good humor, by his panel of roasters. Here are some of the highlights from the night:

1.) “Justin’s Canadian. He’s actually considered American, because no Canadian has ever been this much of an a**hole.” – Kevin Hart

2.) “You gotta give it up for Justin. He started from the bottom and he’s still a bottom” – Hannibal Buress

3.) “I’m proud of you. You have it all. You are literally a guy who has it all, except for respect, love, friends, good parents, and a Grammy” – Chris D’Elia

4.) “This kid has spunk, moxie, and a few other STDs” – Will Ferrell as his alter ego Ron Burgundy

5.) “Justin, as a father of six you have to straighten up, son. Last year, you were ranked the fifth most hated person of all time. Kim Jong-un didn’t rank that low, and he uses your music to torture people.” – Shaquille O’Neal

6.) You bought a monkey! I mean, that monkey was more embarrassed than the one that started the AIDS epidemic.” Snoop Dog

7.) Justin, I’m sure it’s great to have 60 million followers on Twitter, but the only place people will be following you in jail is into the shower.” Martha Stewart

8.) “Justin, Selena Gomez had to f–k you. She is literally the least lucky Selena in all of entertainment history.” Natasha Legerro

9.) The Brazilian prostitute that claimed she was with Justin told the news that he was well-endowed. And that prostitute would know because so was he.” Ludacris

10.) “Is it true you dumped (Selena Gomez) because she grew a mustache before you?” Jeffery Ross

After the roast was finished, Justin Bieber took a minute to try and shed his image as a troubled bad boy, by saying, “The things that I’ve done really don’t define who I am. I’m a kind-hearted person who loves people, and through it all, I lost some of my best qualities. For that, I’m sorry,” he said, “What I can say is I’m looking forward to being someone who you guys can look at and be proud of.”