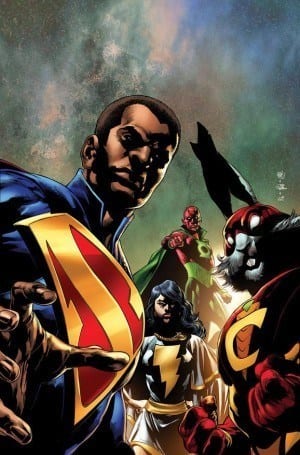 Grant Morrison has still got it

Comic book fans rejoice: Grant Morrison’s The Multiversity is here. A project that Morrison had described as being a decade in the making is well-worth the wait my friends. Whereas most of DC Comics’ The New 52 rebooted line of comics has had a strong scent of forced “brand new” and “totally different,” The Multiversity is completely devoid of that stench; in fact it doesn’t even have The New 52 branding that all of DC’s covers have these days. This is what DC fans have been craving since the relaunch three years ago.

The Multiversity is Grant Morrison’s latest “final statement” on comic books, in a career of such final statements. It is the semi-continuation of works like Final Crisis or Flex Mentallo: Man of Muscle Mystery – meta-comic books that Grant Morrison has made a living off of. Morrison puts the reader in the seat of Nix Uotan, a character introduced in Final Crisis, as he embarks on a universe-spanning adventure. We follow Nix Uotan as he “vivisects” an as-of-now unpublished haunted comic book that spells certain doom for creation as we know it. From there we travel to multiple parallel Earths and are introduced/re-introduced to various comic book characters that serve as analogues for popular characters from DC Comics, Marvel and Image. The plot thus far is fairly familiar for veteran comic book readers: heroes from multiple versions of planet Earth are faced with larger-than-life threat that they must band together against.

The Multiversity uses elements introduced in Morrison’s Action Comics run to move the plot along, but even if you haven’t read any of his prior work, The Multiversity #1 is still a great and accessible read. The only thing you need to do when reading this book is to let go and enjoy the ride. The Multiversity has Morrison’s trademark use of economical writing – each line of dialogue is a relatively quick summation of everything you need to know about a character. High-concept ideas are the lifeblood of a Morrison work that fuels the entire read. Characters and themes from comic book history are utilized in ways that make The Multiversity remind us of the innocent joy that comes with loving comic books.

Each issue of The Multiversity will feature a different artist, and #1 is drawn by Justice League and Green Lantern veteran Ivan Reis. Reis plays with panel work in accordance with the hyper-aware scripting, leaving hero Nix Uoatan literally suffocating between the shrinking drawn framework. The Multiversity is the kind of book where an artist gets to flex their muscles, with characters and concepts that range far beyond the norm. We get to see bombastic blockbuster pages full of action and bravado alongside cartoon logic and physics portrayed by characters like the rabbit Superman Captain Carrot. The shock and confusion shown in Reis’ faces matches that of the reader. Crazy shit is going down and it’s beautiful.

DC Comics has been overdramatic and silly since it relaunched with The New 52. The Multiversity is also a blend of wackiness and sensationalism, but it knows that’s what it’s doing and embraces that fact. Check. This. Book. Out.