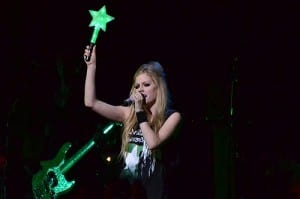 Avril Lavigne, the self proclaimed “princess of punk” (excuse me while I stop to laugh), married Nickelback lead singer Chad Kroeger in an intimate ceremony in the South of France on Monday. The couple claims they paid homage to their home country (Canada) by getting married on Canada Day( although it seems that Canada might have appreciated the gesture more if they’d thrown that very expensive wedding within its borders, but I digress).

Avril Lavigne, known for her wife beater/tie couture, not knowing how to pronounce David Bowie’s name (no need for pesky knowledge of musical legends), and her catchy but terrible music, met Kroeger in the recording studio where he was working on her upcoming album.

Kroeger told reporters of dating Avril Lavigne, “We met while recording music in March. But we started dating July 1, so I’ll let the math speak for itself there. We think it’s very cool that our anniversary will always be on Canada Day. We can’t wait to start our life together. We’re very happy.”

So happy, in fact, that Kroeger popped the question after only six months of dating. He proposed to Avril Lavigne with a 14-carat diamond ring. Avril Lavinge described the proposal to Ryan Seacrest, saying, “I had been making this scrapbook of my time in the studio. I walk over and he had taken a photo of himself holding the ring box and put the Polaroid in my scrapbook. Because I had stickers everywhere he put in ‘Will you marry me?’ It was really romantic and kind of made sense.” (Romantic maybe. Appropriate for a 38-year-old man, no.)

In any case, the wedding went off without a hitch and a small group of 50 guests partied like rock stars all night long. The wedding festivities started on Saturday, but the actual ceremony didn’t happen until Monday. An insider told the press, “It was a wild, all-night party with drinking, dancing, incredible food and lots of laughter and tears of happiness. It was a truly amazing wedding, absolutely magical.”

Avril Lavigne, who has been married once before (to Sum 41 front man Deryck Whibley) and previously dated Brody Jenner, described her wedding as “black-tie fairytale” and planned everything herself. This is the first marriage for Kroeger.