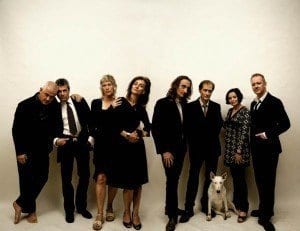 Celebrated British musical miscreants, The Mekons announced they will tour select U.S. cities in July as a full band. The group will make stops in Chicago, Cleveland, Philadelphia, New York, Boston, and more during the two-plus-weeks stretch.

The genre-defying collective Mekons emerged from the 1977 British punk scene, and progressed from socialist art students with no musical skills to prolific, raucous progeny of Hank Williams. Theirs is an improbable history: a surprising and influential embrace of folk and country music, with occasional forays into the art world.

The current lineup has remained intact since the mid ‘80s marked by defining releases The Mekons Rock ‘n’ Roll, Fear and Whiskey, I Love Mekons, and their most recent Ancient & Modern in 2011.

July dates for the full-band lineup can be found here: https://www.bloodshotrecords.com/tours-events/6864

For those who can’t make any of the shows, Revenge of the Mekons, a documentary about the band, is being screened at select theaters across the U.S. For more information and to watch the theatrical trailer, click here: