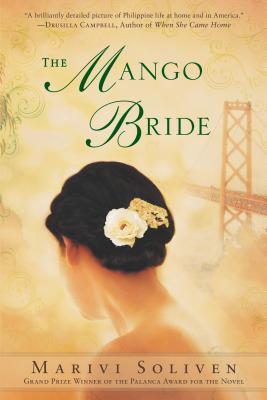 Genres: Literature / Fiction / Asian American / Filipino
The Mango Bride by Marivi Soliven is centered around the lives of two women who live in Manila, Philippines. Amparo comes from the wealthy and well-reputed Duarte-Guerrero family but was banished to the United States after a scandal. Beverly Obejas, on the other hand, lives in poverty and fantasizes of a more glamorous life that she sees in movies.

After her mother’s death, Beverly clings on to notions of romance and material prosperity, eventually coming to believe coming to the United States as a mail order bride would help her attain those dreams. As a pretty-faced nobody in the Philippines, Beverly constantly compares her life to those of people around her.
Her constant envy of others and self-delusional mindset irritated me throughout the novel, but that’s the sort of “antagonistic personality” that Marivi Soliven likes to write. I was torn between understanding Beverly’s situation and disliking her for her self-destructive (and naive) mindset. It made The Mango Bride all the more compelling because I wanted to find out what would happen to Beverly and Amparo. In short, Beverly life is a Cinderalla story gone horribly, horribly wrong.

As for Amparo, she is living in the United States, and overall, I get the sense of loneliness that one feels when they are disconnected from the community of people like themselves. As a telephone translator, she speaks with Filipino women from across the United States, and there is this overall feeling of quiet despair at how spread apart these people are, especially for the women enduring domestic abuse. Fortunately, Amparo lives in California and has formed an alternate family with some fellow outcasts of society: her uncle Tito Aldo (exiled due to scandal, like her), Manong Del (one of the earlier Filipino migrant workers), and her boyfriend Seamus, who isn’t exactly an outcast but lives with a more liberal mindset than those that Amparo grew up with.

Senora Concha is an example of the type of person I enjoy reading in a book but would hate to meet in real life. I imagine the fun Soliven had in writing up such a bitchy character, who is an example of preserving the status quo of postcolonial values, in which all things (languages, culture, people) European/American trumped the Filipino. I wanted to happily plunge a knife into her back. At times, I had trouble believing that some people can be so superficial, but I can see how someone who has grown up in the seat of privilege, who wants to see the family’s reputation prosper in the long run, can end up that way.

The writing throughout The Mango Bride is stunningly beautiful. Marivi Soliven describes the surroundings of Amparo and Beverly’s lives with such vividness that I could almost taste the food or scrape off a layer of grime from the walls of the run-down parts of Manila with my finger. Spanish and Tagalog terms are interwoven fluidly with the text along with their translations for those who are unfamiliar with either language.
Amparo and Beverly are intriguing characters in The Mango Bride, and some elements of their lives are borrowed from soap operas – an influence that Soliven nods to in the interview at the back of the book.

The Mango Bride has the drama of a soap opera, but instead of perpetuating the status quo, it critiques the postcolonial and classist values that many people live by but don’t question every day. It also calls into question the idea of motherhood, and how close familial bonds can be forged between people who aren’t related by blood – a concept beautifully played out in this multi-layered story.
My Rating: 5/5
[easy-social-share buttons="facebook,twitter,google,linkedin,stumbleupon,pinterest" counters=0 hide_names="force" fixedwidth="yes" fixedwidth_px="111"]
Previous ArticleTwiztid's New Video "Boogieman"Next ArticleCroaking Ass and Taking Names in our PAX East Game of the Show: Gigantic