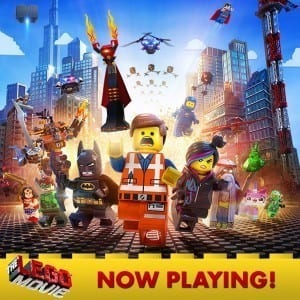 The Lego Movie is an animated high-stakes adventure of the imagination. The film opens with the villain Lord Business (Will Ferrell) attacking the wise wizard Vitruvius (Morgan Freeman) and taking the weapon of ultimate power – the Kragle. Flash forward to present day (8 ½ years later) and we meet Emmet Brickowski (Chris Pratt), who is a common everyman that lives in the city of Bricksburg, which is full of worker bee types. The citizens play by the rules and follow basic instructions for how to live their day-to-day lives. At the end of one such average day Emmet stumbles upon an enchanted item known as “The Piece of Resistance,” and is struck with magical visions. Because of this, a character named Wyldstyle (Elizabeth Banks) takes Emmet to her group of “Master Builders” and believes that he is the prophesized “Special” who is destined to defeat Lord Business and his plans to destroy the world with the Kragle.

The Lego Movie could have very easily been an hour-and-a-half toy commercial but instead dared to embrace the exact opposite mantra. When you buy a Lego set, it is a very straight-forward process: you open up the set, follow the instructions and build the model seen on the front of the box. Within the first ten minutes of the movie, the filmmakers take this common knowledge notion and use it as a framing device for individualism vs. collectivism; “order and stability” vs. “chaos and anarchy.” Emmet literally does everything by the book and The Lego Movie’s message is that that might be a bad thing. The Lego Movie wants us all to fight our programming and stop living life by the instructions.

The comedic structure of The Lego Movie follows a similar mold of unconventionality. It plays by the new age quick-cut school of comedy that will introduce an concept and play with it just long enough before they hit the audience with another even more ridiculous idea. It is so hard-hitting that you don’t get a chance to breathe from joke to joke. It doesn’t stay in one place too long, or even in one dimension for too long.

The Lego Movie is a film that draws its strength from not underestimating its audience’s intelligence. It’s playful and lively for the kids and gives winks and nods to the real world for the adult audience, in a similar way to Toy Story. And it commits to the medium of Legos so well – everything is broken down to Lego bricks, and the animation style imitates a form of stop motion. If anything else, The Lego Movie is worth a viewing for the cameos alone. There are plenty of licensed characters that pop up such as Will Arnett’s entertaining take on Batman as well as scores of Lego figures from your childhood that you may have forgotten about. So put down your instruction manual and do what I tell you to – go see The Lego Movie. (Ok, that sentiment may  contradict the idea the movie is trying to put out there, but still. See it!)