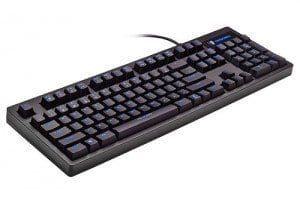 PC gamers are familiar with the dozens of options facing them when they’re shopping for a gaming keyboard. Dozens of buttons reflect retail prices in the hundreds, and for good reason. Gaming keyboards, when used correctly, can be enormously beneficial. They really do give you an advantage over your competition, depending on the game and the keyboard, of course. But every now and again you’ll come across a keyboard that’s so painfully simple, one that doesn’t have LED screens, attachments, hundreds of buttons, or software that takes a rocket scientist to master.

The Tesoro Excalibur is that keyboard.

At first glance, Excalibur is just a keyboard, the same as the sword it’s named after is “just a sword.” You’ll find that after pulling it from the stone, Excalibur is much, much more. Beauty, design, versatility, and cost come together to provide a great experience for novice and expert alike, a fact confirmed through how the hardware was reviewed.

The Excalibur looks like any old keyboard with its basic size and shape, and doesn’t include any special macro keys or profile buttons. That doesn’t mean they’re not their, only that there are no added buttons littered here and there, which sometimes can make keyboards look cramped, or worse, daunting. Because of the simplistic design, Tesoro advertises Excalibur as “classic,” with function at your home or office.

The keys are backlit in blue, and you can assign “zones” to light up, but frankly if you’re not in love with the soft glow coming from the entirety of your Excalibur, you’re insane. For customization, you have the option of selecting the type of switches, which will affect the sound and resistance of your key presses. For purposes of the review, the Excalibur had the “Kailh Blue” switches, providing an audible “clicking” noise when you use it, with a little bit of resistance when you press the keys.

Despite not having an overwhelming number of extra keys, users can still take advantage of macros and profiles, allowing for full customization in your favorite games. Sporting 512Kb of on-board memory, you’ll be able to have five separate profiles, each holding 200 macros.

After spending a lengthy period of time with the Tesoro Excalibur, it was nice to not grow tired of it. While it doesn’t look like it would be something that a hardcore gamer would depend on, for those who have a robust library of PC games, you’ll be pleasantly surprised with how useful and reliable it is. Priced below the magical $100-mark (retailing around $89.99 unless you can catch it on sale), it offers more than your standard keyboard. Perhaps the best thing about the Excalibur is that as your need for more options and macro keys grows, and you begin investing in higher-end hardware, you’ll always be able to go back to the Excalibur if you’re in a pinch or if you need to simplify your gaming setup.