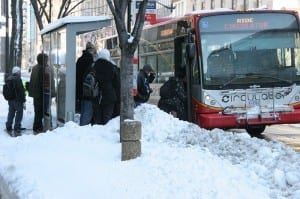 A Philadelphia man was caught using a cell phone jammer, a device used to keep other passengers on the bus from using their cell phones.

He told a reporter at NBC10, “I guess I’m taking the law into my own hands, and quite frankly, I’m proud of it.”

Teresa Masterson, a writer at NBC10, discovered the jammer during one of her morning commutes and had this to say about it:
“While riding the bus, my cell phone signal suddenly went out, which is not normal, and continued to search for a signal for 15 minutes. After a little while, I noticed that everyone else on the bus on his/her cell was having the same problem. Then I see this guy. He’s openly holding something that looks like a walkie talkie with four antennae in his hand the whole time…I’m pretty sure it was one of those devices that cuts off signals; Jennifer Lopez used one in Enough, so that’s all the scientific analysis I need.”

The jammer, which is highly illegal, blocks radio frequencies for not just cell phones but anything that uses frequencies. According to Forbes.com, this means that the jammer could potentially block communication between the bus driver and the dispatch centers, possibly resulting in a public safety hazard.

The device also cuts off incoming calls, blocking someone from being able to communicate with the world around them.

These devices are becoming popular and have appeared frequently in places like New York and Washington D.C. The prices range from $40 to more than $10,000.

A New Jersey commuter said, “They’re the best thing ever. It fits in your pocket- they even make shady ones that look like packs of cigarettes. I’d guess it’s effective for about a 15 ft radius, possibly more.” The commuter uses the jammer when a passenger talks “too loud” or for “too long.”

“When I’ve used it, it’s to cut off a loud talker on the train that’s sitting hear me.” He purchased the device online from a company in China, where they are legal and has no guilty about his actions. “No guilt, just personal high fives.”

It’s hard to say where the future of cell phone jammers is headed or if we might see some laws soon for them.