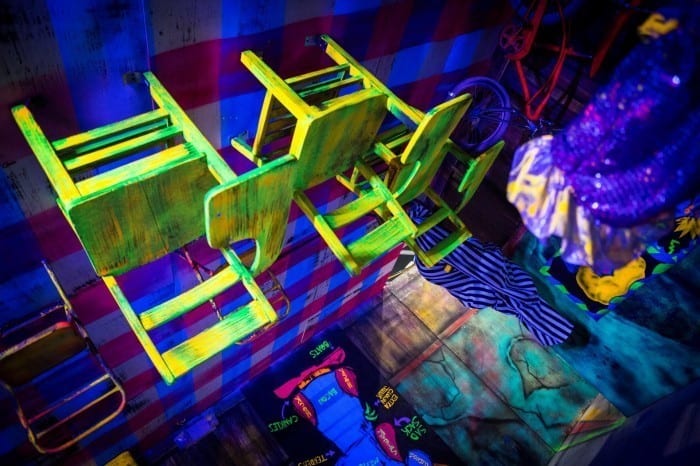 It’s baaaack! Rob Zombie’s Great American Nightmare was so wildly successful during its inaugural year in the Chicagoland area that it is going to return bigger and better than ever. From September 25-November 1, the horror attractions will be coming back to the Odeum Expo Center in Villa Park, IL.

Rob Zombie was so satisfied with last year’s turnout that he couldn’t wait to bring his horror phantasmagoria back in action. “I am thrilled to be bringing The Great American Nightmare back to the Chicago area for its second year.” He adds, “After last year’s overwhelming response we’ve decided to return with a completely new Nightmare. It’s more vile and disgusting than ever. Have fun.” This year will feature three new attractions and will be based of Zombie’s cult films, in the same fashion as last year. Last year, Zombie caused quite a stir with the extremely controversial themes of the rides which included a tour of all of America’s serial killers that recreated all of their murders in the goriest of fashions.

The first attraction will be ‘Captain Spaulding’s Clown School’ and will include scenes from both House of 1000 Corpses and The Devil’s Rejects. This one I am most looking forward to because it will be interesting to see how Zombie incorporates Spaulding’s sadistic humor into the horror attraction.

The next haunt will be The Devil’s Rejects, which will follow the police hunt for the three miscreants. I wonder if this will include the iconic ending scene that played out perfectly to the sound of ‘Free Bird.’

The last and freshest haunt will be an ode to Zombie’s new film ‘31’. If you are afraid of clowns then this is the one you might want to skip because it follows a gang of horrifying clowns that want nothing more than to terrify and torture you.

Bloody Boulevard will also be bigger and better this year, featuring more carnival rides and even scarier roaming characters that will deliver the thrills and the chills. Two of the nights in Villa Park (October 2 and October 4) will feature a Rob Zombie concert, as well as the haunts. Tickets for the show and admission to the haunts start as low as $45. Note that carnival rides will not be open on these dates. For those people that are like me and hate waiting in lines, then you may want to look in grabbing a VIP package, which includes a commemorative t-shirt and quicker access to the haunted attractions. Some of the VIP packages will also include a better viewing area of the concert and a VIP-only bar.

The hours for Great American Nightmare will be 7 pm to Midnight on Fridays, Saturdays and concert nights; and 7 pm to 10 pm on Thursdays and Sundays.

The Odeum Expo Center is located at 1033 North Villa Avenue in Villa Park, IL, right outside of the Chicago area. It’s accessible downtown by major highways and is a quick Metra ride for those who don’t have access to cars.

Check out The Great American Nightmare at the following dates: