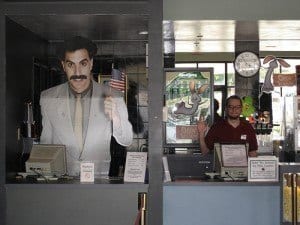 The Conjuring opened with an impressive $17 million last night, topping the box office charts. Distributed by Warner Bros and New Line Cinema, The Conjuring is a supernatural thriller about a husband and wife ghost detective team investigated the strange-goings on of an east coast farmhouse. It looks like movie-goers packed into theaters for The Conjuring to be scared, make out like teenagers or just enjoy some nice AC.

The Conjuring took the lead from two-week box office king Despicable Me 2, which made $7.5 million on its third weekend. It looks like people would rather see a creepy supernatural thriller like The Conjuring or give Steve Carrell a repeat viewing over than pay too much attention to Ryan Reynolds.

Two films of Reynolds’ opened this weekend: Turbo, the animated tale of a snail in the Indy 500 (?), and R.I.P.D., the supernatural action film co-starring Jeff Bridges.

Turbo already gained $9.7 million on its Wednesday and Thursday showings, and an additional $6.5 million last night, placing it in third at the box office last night. R.I.P.D. on the other hand had a rather pitiful opening with $12.5 million; the budget of that film reportedly being $154 million.

Will The Conjuring continue to ghost ride the whip to the top of the box office this weekend? It’s pretty likely. Not only is The Conjuring the strongest open of the weekend thus far, it’s also received high critical praise. Rotten Tomatoes gives The Conjuring an 85% fresh rating as far as critics go; the audience rating is at 90%.

Are you going to see The Conjuring this weekend? Or do you feel sorry for Ryan Reynolds?