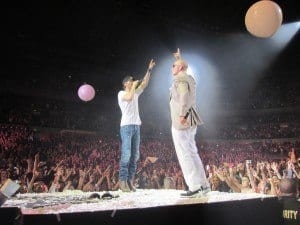 Pitbull and Enrique Iglesias are both seeing much success among the charts with their latest hits. Iglesias’ “Bailando” currently sits at No. 15 on the Hot 100 Chart while Pitbull’s recent single, “Fireball” is reportedly from his forthcoming album, Globalization.

With two hits currently receiving much radio airplay, it’s no surprise that the two latino superstars released recent news that they will be extending their national co-headlining tour that is scheduled to kick off this September.

The tour which was originally targeting 15 cities has been extended to include 24 different cities this fall.

Popular reggaeton singer, J Balvin will be the opening act for the entirety of the tour. Blavin’s “6 AM” had held a spot on the Top 10 of Billboard’s Hot Latin Songs chart for sixteen weeks and currently ranks at No. 5.

The tour will kick off in Newark, New Jersey on September 12th and will wrap up on October 28th in Orlando.