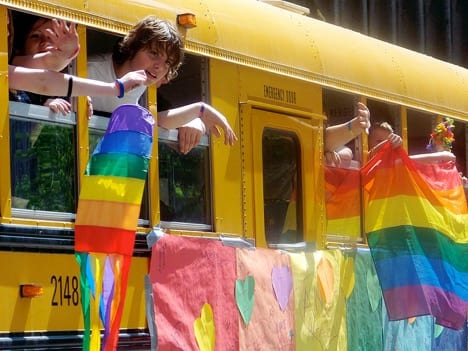 Are we providing enough space for the LGBTQ community in the academic sector?

Ex-President Obama has had a major impact on America and for various minorities living there—including the LGBTQ community in schools. Although Mr. Donald Trump is our new president which may mean changes related to those laws are in order. So it is up to the people of America who stand for equal rights and who feel that everyone deserves to be treated with respect to do something about it. These are the values that we were raised with and we will still uphold those values no matter whether the person who is in power approves of it or not.

This also brings the issue to blessing everyone with the privilege of educating oneself. People in America are blessed with great schools and colleges that others yearn to get admission into. So it only makes sense that we are more accepting of the students that are of a different sexual orientation. All people are human beings and our ex-president went to great lengths to demonstrate that through the laws he implemented, showing his support to the LGBTQ community in schools.

It is understandable that colleges don’t want too many international students as it affects the population of local students coming in the colleges. But Americans with various sexual orientations should be considered equally just as any other straight American. College campuses have become more accepting of these students over the last few years. It can be compared to the 60 college LGBTQ centers in 2006 which have now increased to 100 centers that are even controlled by the college staff.

How colleges help the LGBTQ community in schools

There are even specialized options for members from the LGBTQ community in the academic sector to take up gender neutral housing schemes which can give them a safer environment. It boosts their own confidence and can open more communication with their own community members. There are also LGBTQ specified student loans that the government offers for the community. This helps people achieve their dreams, giving them better opportunities in the professional world.

Coping with bullies on campus

There are people who suffer bullying—even at the college level—and community members may not know whom to go to if that situation occurs. Certain measures need to be taken so that LGBTQ members can feel they are able to speak out against the verbal or physical abuse they receive. Also, if nondiscriminatory articles are included in the handbooks provided to students on campus, then the bullies may refrain from calling out to people of different sexual orientation.

College staff also need to take a stand against bullies to protect such students and report them, thus protecting the students and the school’s reputation. The schools and colleges have opened the doors to the LGBTQ community in schools with pen hearts, but people still need to be educated about respecting and accepting these community members in the academic sector. This is the only way that we can aim for a better, more accepting world.

You might also enjoy: Staying Safe on Campus in Not Necessarily a Right—Apparently

Author Bio:
Sherley Alaba is an eagle-eyed wordsmith; a writer and translator, always interested in ways which can help individuals (especially youth and women) reach their full creative potential. Her focus has been on writing, producing and editing stories on business, finance, interesting personalities, entrepreneurs, culture, the environment, gastronomy, lifestyle, and social issues.