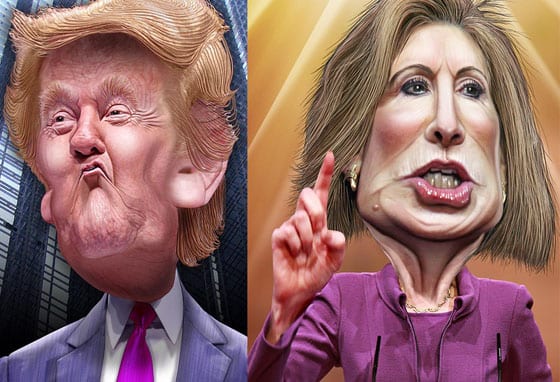 Fiorina came out on top

Again, Carly Fiorina came out on top of the Republican presidential debate against leading party front-runner Donald Trump, revealing her poise, expertise, and impassioned platform in opposition to abortion and Planned Parenthood. She expressed her strong conservative values of the future of our nation’s reproductive healthcare. “This is about the character of our nation and if we will not stand up and force President Obama to veto this bill, shame on us,” Fiorina said, appealing to the socially conservative base of the party. Fiorina handled Trump with ease, placing him in a defensive position, sternly confronting his statements regarding her personal appearance, when he told Rolling Stone: “Look at that face, would anyone vote for that?” Fiorina noticeably captured the crowd during the presidential debate in response to Trump’s assessments: “I think women all over this country heard very clearly what Mr. Trump said.” Fiorina also challenged his credentials as a global businessperson, strategizing global hotspots and suggesting ways to resolve them.

Marco Rubio took on Trump from a passive yet powerful approach during the Republican presidential debate. Instead of going on the attack when questioned about the integrity of his voting absence, Rubio focused on his strengths as presidential candidate. “When Trump pointed out Rubio’s voting absences in the Senate, Rubio refused to retort with an attack of his own,” stated CNN reporter Jeremy Diamond. Rubio did however explain how his absences are reflected on his constituents, claiming that both political parties are out of touch with the lives of the American people. Rubio’s perspective on current political policies and national issues along party lines proves why he remains a leader among the GOP elites.

Jeb Bush highlighted several crucial points during the Republican presidential debate, reestablishing confidence with his supporters. “Bush appeared to come out of the shell of the tortoise he has so heartily embraced as his symbol to give voters a taste of the passion he has struggled to showcase,” stated Jeremy Diamond. Trump accused the previous Bush administration, claiming that their poor diplomatic actions led to the election of President Obama. One of Bush’s best moments in the Republican presidential debate is when he defended his brother’s administration, stating that his actions kept America safe. However, Bush faced harsh criticism for how he handled remarks about his wife’s Mexican decent. CNN political commentator Amanda Carpenter claimed that, “the former Florida governor should have been more forceful in demanding an apology from Trump.” Despite this, Bush’s standout moments and improvements on his overall performance in comparison to his first Republican presidential debate, reveals why he remains a competitive contender.

Much like the first Republican presidential debate, Rand Paul and Trump went at it for a second time. Paul withstood a barrage of attacks from Trump, but failed to address his attributes and strengths as a Republican presidential candidate. Instead, he just pointed out Trumps weaknesses and had very little to say regarding his foreign policy. While spending much of his time attacking Trump, Rand missed many opportunities to convey his libertarian lean.