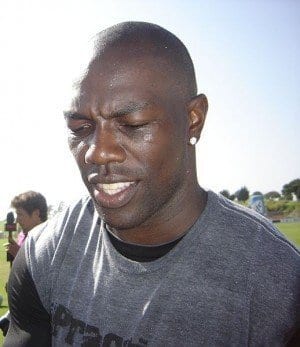 On yesterday’s showing of Dr. Phil, Terrell Owens, former NFL star, confronted three of his four baby mommas. During the show Owens and the ladies discussed the lack of his parenting presence in his children’s lives as well as the missing child support payments of about $50,000.

The women of Owens’ life don’t regard of him very fondly. One accused him of being ‘evil,’ and another accusation against Owens was exploiting their son.

First wife of Owens, Kimber, claims that Owens has only seen their daughter 12 times that year and goes on stating, “He doesn’t call, he doesn’t send Christmas gifts.” When asked if it really has been over a year since he last saw his daughter, he was unsure how long it has been.

“The thing is, with me traveling back and forth, I don’t have a set schedule. Pretty much 90% of the time every time I’ve reached out it’s been a bad time,” Owens said.

Owens justifies his actions due to the lack of his own father’s presence in his life. “I didn’t know who my daddy was until I was 10 or 12. Surprising as it may seem, he was living right across the street.”

Towards the end of the show, Dr. Phil addresses to Owens, “You have an opportunity, because it’s not too late.” Addressing the three mothers, “If you do anything aggressively or passive aggressively . . . to block his relationship with his children . . . trust me, the day will come when it will bite you in an ugly, ugly way.”