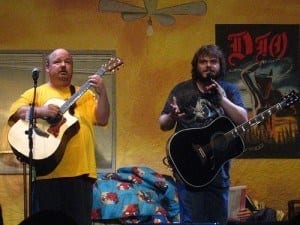 The duo is back

The rock band Tenacious D announces the release of their latest album, Rize of the Fenix, with a video of the single entitled, To Be the Best. This comes long after their latest project, the 2006 film, The Pick of Destiny, was considered to be an epic fail in the box office.

The video chronicles the climb of Tenacious D back to the top after a few rocky years. Following a nervous breakdown, band mate, Kyle Gass locked himself away for years. He reunites with band mate Jack Black, who is now going by the name Hollywood Jack in order to release the new album.

The video is more of a comedic sketch but of course has the bands music. In standard Tenacious D style, the two have a slew of cameos from famous people who stop by in the video. Josh Groban shows up and even the method actor Val Kilmer takes a bullet that is fired by Gass at Hollywood Jack. The death of Kilmer, according to the video, would spur the reunion and climb of Tenacious D back to the top.

During the rock hiatus, the band had a few books to help keep their name out there, “Blowing F—ing Minds for Idiots” and “Impregnating Ears for Idiots.”

Rize of the Feniz hits stores May 15. See the To Be the Best video below: