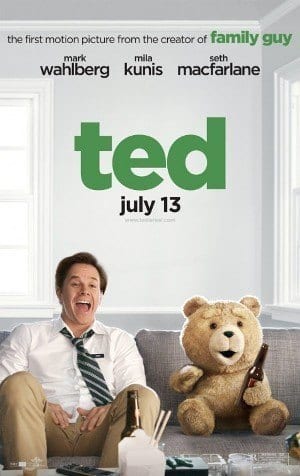 A stuffed bear may not seem like the secret to box office success, but this weekend’s ticket sales proved otherwise.

Ted, a film directed by Seth MacFarlanein, revolves around a character played by Mark Wahlberg and his vulgar teddy bear. The film brought in $54.1 million, according to box office tracker Exhibitor Relations.

Following on the tails of the box office success of Ted was Magic Mike, a movie starring Channing Tatum and Matthew McConaughey as male strippers. The movie brought in $39.2 million.Magic Mike only cost $7 million to make.

Ted is already being compared to The Hangover for its similarities in raunchy humor, revolving around drinking and drug use. To compare, the first Hangover movie took in $48 million in its first week in 2009, adjusted for inflation.

With not many other comedic releases scheduled for the rest of the month, Ted is said to continue being a success for a while.

“Given that long runway, and the fact that there hasn’t been a strong comedy yet this summer — both The Dictator and That’s My Boy disappointed — Ted should be a strong performer for weeks to come,” Benjamin Carlson, president of Fizziology, a company that monitors social media to advise movie studios, told The New York Times.

Ted will not open in foreign markets until August or later.

Overall ticket sales in North America rounded out at $202 million for the weekend, which was a 3 percent increase from this time last year.

Up next for the box office is this week’s release of The Amazing Spider-Man on Tuesday, as well as the final film in the Batman triology, The Dark Knight Rises, due out July 20.