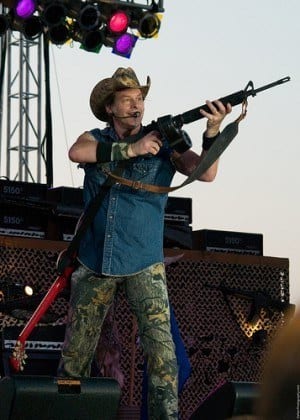 “A life and death vote”

Nugent told the NRA last week that he would be “dead or in jail” if Obama were to get re-elected. He will meet with the secret service today and went on Glenn Beck’s radio show last night. “We actually have heard from the Secret Service, and they have a duty, and I salute them. I support them and I’m looking forward to our meeting tomorrow,” Nugent said on the show.

Ted Nugent, who is also a sheriff’s deputy, called the November election “a critical life and death vote” but later claimed he was nonviolent, “The bottom line is, Glenn, I’ve never threatened anybody’s life in my life.” He continued, “I don’t threaten. I don’t waste breath threatening.”

Ted Nugent is known for his defense of America’s gun laws and hunting rights, and this is not the first time he spoke out towards Barack Obama. At a concert in 2007 he said, “Obama’s a piece of s***, and I told him to suck on my machine gun” and even more comments came at a Republican event earlier this year, “The whole world sucks, but America still sucks less,” followed by, “But with this administration, we are catching up.”

“We need to ride into that battlefield and chop their heads off in November,” Nugent later said at the convention.

Ted Nugent has caused an uproar by many, democrats and republicans, who condemn violence, but Nugent backed up his comments on the Glenn Beck show, “Every reference I made, whether it’s a shot across the bow or targeting the enemy, it always ended the sentence with ‘in November at the voter booth.”