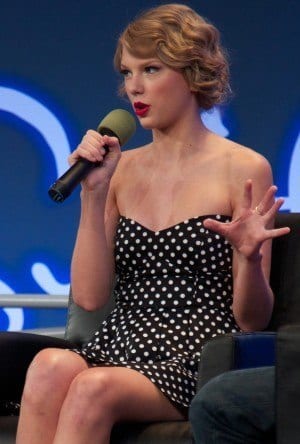 Taylor Swift shared a lot of information in her recent broadcast where she announced her forthcoming album, released her new single and revealed her new sound.

Taylor Swift overwhelmed fans this past week during her live Yahoo! broadcast that was nothing short of an information overload.

The songstress revealed plans for an 80’s pop-inspired album, shared a new single from the album with fans and also revealed that her sound has entirely changed from her past work, noting that the changes naturally mirror changes in her personal life.

The 24-year-old revealed that the title of her forthcoming album will be 1989, following 2012’s Red. Swift also shared her first single, “Shake It Off,” which is her response to false rumors and attacks she’s often slammed with.

She worked with hit producers Max Martin and Shellback to create something entirely different from anything they’ve ever done together or individually. “Shake It Off” was a result of their combined efforts which dubbed Swift’s official transition to an entirely new genre: pop.

Although it’s rare for musical artists take such a bold risk and reinvent their sound entirely, especially with such high expectations, “Shake It Off” certainly proves where Swift belongs and seems like an all too natural transition for the songstress who has been toeing around the fine line that separates country from pop.

In addition to news regarding her forthcoming album and new single, Swift also surprised fans with the official music video for “Shake It Off” which can be viewed here.

1989 will officially be the first documented pop album for Swift and will be available in stores Oct. 27.