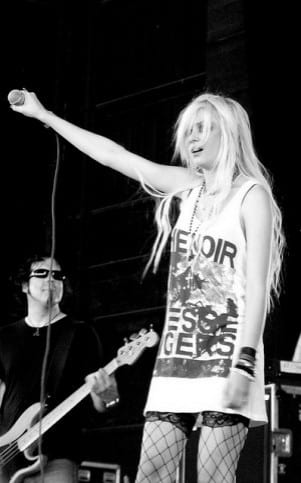 Taylor Momsen, of Gossip Girl fame, went for straight-up shock value in a video released today by her rock band, The Pretty Reckless. Apparently attempting to defy any and all expectations, the video actually features no music, instead opting for a voiceover of Taylor Momsen reciting a verse from the band’s song “Under the Water.”

Oh, and by the way, 19-year-old Taylor Momsen is completely naked in the video, which consists of black-and-white close-ups of various body parts before ending on one final full-body shot. The amount of eyeliner Momsen is wearing, though, is almost enough to distract from other, er, distracting features.

The Pretty Reckless is a straight-up hard rock band produced by Kato Khandwala, who has also been a producer for Blondie, Paramore and Breaking Benjamin. On the band’s website, Taylor Momsen lists her influences as “Led Zeppelin, The Who, Pink Floyd, Audioslave, Soundgarden, Oasis and Nirvana. That’s what I listened to. My rock idols are all men.” Well, it’s safe to say Taylor Momsen is most definitely female.

The new video is part of a series called “The Words” by Amp Rock TV, available to watch on its YouTube channel.