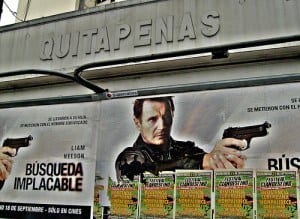 Taken 2 remains at the top of the box office for the second weekend in a row. So far, the Liam Neeson action-thriller has amassed $86.8 million domestically, nearly doubling the film’s $45 million budget. Having grossed $22.5 million last weekend alone, Taken 2 has appeared in 3,706 theatres nationwide and even sat down the debut of Argo, Ben Affleck’s director/actor film loosely based on the 1979 Iran hostage crises in Tehran.

From 20th Century Fox and EuropaCorp, Taken 2 is the story of Brian Mills (Neeson), a retired C.I.A field operative that is kidnapped alongside his recently reunited wife (Famke Janssen) during the family’s stay in Istanbul.

Whereas the first film focused on Mills’ daughter Kim’s (Maggie Grace) abduction while vacationing with a friend in Paris, Taken 2 turns the first film’s plot on its axis. In the sequel, Mills—the hunter scouring Europe for his missing daughter in Taken—is hunted by members of an Albanian mafia vying for vengeance for their fallen comrades.

Needless to say, Taken 2 still sees Neeson breaking a fair amount of necks, with ample chase scenes to keep the adrenaline flowing and audiences reveling in the sight of a 60-year-old man fighting hand-to-hand combat.

Though the plot bears striking similarities to that of the first film, including the same flinching dialogue that at times appears silly and overly endearing, that much is expected. As with most blockbuster action films, all it takes is a strong will to suspend one’s disbelief and an appreciation for extreme fatherly determination to truly enjoy the film that has over the years gained a cult following.