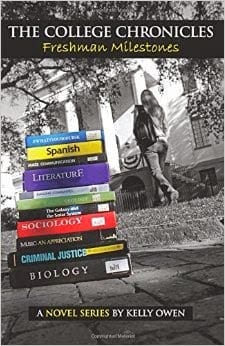 If anyone ever needed a handbook to the freshman year of college, this would be it.

As someone who lived on campus at an infamous party school dubbed the “University of Casual Beer & Sex” for her freshman year, I can vouch for the social climate that we get in The College Chronicles: Freshman Milestones. All the fun social opportunities (parties! concerts! late night talks! group “study” sessions!) can morph into a huge distraction from one’s studies if one is not disciplined.

Set in Charleston, South Carolina, The College Chronicles: Freshman Milestones by Kelly Owen follows the life of a college freshman named Cadence.During her first year of college, Cadence Cooper experiences and witnesses a lot of new, wonderful, and also terrible things in the fictional Charlestowne College.

SLEEPING FEET FROM STRANGERS is not a description Cadence Cooper remembers from the brochure that brought her to Charlestowne College, but this jarring reality becomes one of many she encounters during her freshman year. Threatened with expulsion from a “Demon of Darkness” professor and tormented by a hellacious roommate, Cadence struggles to survive in this realm of hookups and higher education. Here sex, drugs, and drinking become subjects of study just as much as coursework. Just when she’s ready to give up the dream of a college degree, she finds romance with a rock star classmate and a position as a student photographer. With her lens fixed on the campus and Charleston, a stunning city that teaches its own powerful lessons, Cadence uncovers the details of a devastating rape, a mysterious suicide, and a secret group intent on exposing a scandal that will forever change the school. Knowledge never comes without cost–or surprises. Life with strangers transforms into profound experiences with friends, foes, lovers, and liars in and out of the Holy City’s classrooms. Cadence’s first-year journey begins with “English 101: The Composition of Life,” but where it ends shocks even her.

The College Chronicles: Freshman Milestones aims to capture an enormously wide scope of the freshman experience in a single book. In many ways, Owen’s book succeeds in giving the reader a taste of many, many possible experiences of a freshman student:

Welcome to the Fast-Paced College Life

Everything is new to Cadence, who is a young white woman who grew up on a farm in the South. Before coming to Charlestowne College, Cadence had never had sushi before, and she didn’t often meet people of different cultures or backgrounds. She is the perfect blank canvas for the craziness that is college.

Since we are following Cadence around campus, there is no central plot. Instead, we meet a lot of people moving swiftly in and out of Cadence’s life. Such is the way of the fast-paced life on campus, and Cadence meets a few people who especially broaden her horizons, such as Isabella, a student from Mexico, who helps Cadence with a presentation for her Spanish class. I saw this same kind of enlightenment in my suitemate, who came from a home of socially conservative values and went home with a more open mind.

Covering A Wide Scope of Experiences: Good or Bad?

The advantage in covering so many experiences who come in the shape of characters is that we get to explore a wide scope of experiences, more than any individual freshman ever will. A lot of these stories are heard through the grapevine, but very few freshmen will ever experience it all themselves. This is freshman year on steroids. All of these people and tidbits of life come together to make Charlestowne College feel like real.

The disadvantage of covering such a large collection of experiences is that some individuals that Cadence meets are reduced to college archetypes, like they were only placed there to represent “eating disorders” or “bad roommate”. While I recognized a lot of the stock experiences that they represented, some parts of the book with these archetypal college figures felt forced or disconnected from the rest of the narrative. Sometimes there would be a sudden switch in point-of-view from Cadence (third person limited) to another character for a few paragraphs, which was a bit jarring to me as the reader.

A Heavy Tome: More Entertaining on Ereader than Physical Copy

At 572 pages, this book is very long, and its physical form is no waif nor supermodel. I read the first half of it using the physical paperback, and the last half on my ereader. I felt a lot more comfortable reading this book on the ereader, partly because I could do so with one hand, and also because I was better able to focus on the beautifully descriptive language.

Kelly Owen’s writing voice is remarkably fun, and deliciously tongue-in-cheek in some parts. One of my favorite spots in the book was the passage right after Corrine (Cadence’s repulsive roommate) decides to drop out of college and marry her high school sweetheart:

“A good ‘ole boy, raised on a strict diet of God, guns, and backwoods culture, Jed believed a woman’s place was in the home, so he worked hard to restore Corrine to the proper path dictated by the limitations of her gender. This country boy would rescue her from the city and the evils of elitist professors and fanatical feminists by convincing her she was miserable…Together they would pursue their American Dream, raise their children in the steadfast tradition of family values and grow old teaching their grandchildren the importance of faith without question…” (WOST 261)

I read this in a doctor’s waiting room and snorted with delight. The lady next to me wasn’t very appreciative.

The College Chronicles: Freshman Milestones by Kelly Owen offers a great overview of the freshman experience to high school students who haven’t attended college yet, seasoned college veterans who have braved and survived their freshman year, and also to anyone who is curious about what it’s like during a student’s first year of college. If anyone ever needed a handbook to the freshman year of college, this would be it.

In some parts, The College Chronicles: Freshman Milestones can be a bit unfocused at times due to the wide breadth of Cadence and her friends’ experiences, but the latter half of the book has more of a focus than the first half, as people’s paths start to converge. The beautiful writing keeps things entertaining throughout the whole book. The foreshadowing at the end sets up the scene for the next volume in the series. I look forward to reading about Cadence’s sophomore year!

Find out more about The College Chronicles: Freshman Milestones by Kelly Owen on:
Amazon | Goodreads