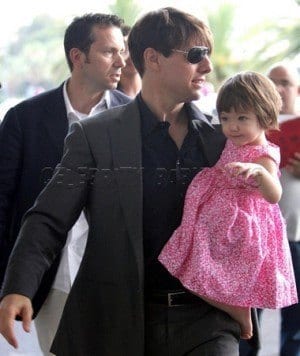 Katie Holmes and Suri Cruise were on their way home, when a garbage truck hit the side of the car the 33-year-old and six-year-old were in. Nobody was hurt, but Suri Cruise cried in fear. And Suri Cruise was seen with father Tom Cruise for the first time since his divorce with actress Katie Holmes, and since his absence due to filming.

There are scratches and a dent on the side of the car involved in the accident. Suri Cruise and Holmes were on their way home from Cruise’s gymnastics practice.

Meanwhile, Tom Cruise was finally able to spend the day with Suri Cruise, now that he is back from filming internationally for the upcoming Oblivion. Holmes has full custody over Suri Cruise, according to Access Hollywood.

Also according to Access Hollywood, Suri Cruise will begin school in the fall in New York City, where she will be living with her mother.

According to Reuters, an investigation over the car crash is currently in progress. The garbage truck company may be at fault if the driver was working at the time of the crash. In such a case, Classic Recycling of Clifton, N.J., the company the truck belonged to, would be liable for payment of damages.