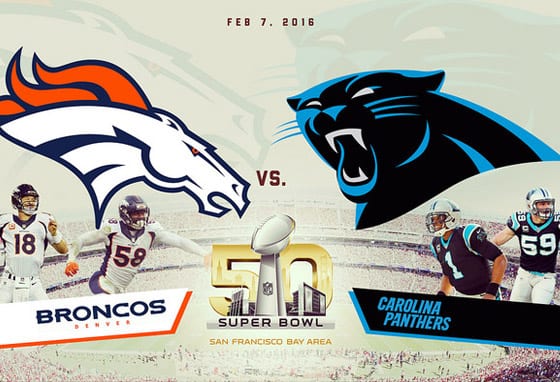 So Super Bowl 50 went down in Santa Clara, California Sunday evening and once again a defensive minded team took control. The Broncos came into the game against a 15-1 Carolina Panthers team who had dominated the first half of each of their two previous playoff games and looked prime to bring home the organizations first Super Bowl win in just their 2nd appearance. Although the game was a bit underwhelming overall, the story line of the newly named MVP and soon to be face of the NFL, Cam Newton versus the savvy veteran Peyton Manning looking to write the ending to his own prestigious legacy stood out. A matchup that really wouldn’t unfold as both defenses put on great shows and proved they were the real engines to both of teams.

Peyton Manning came into this game off of a season where he sat the bench for the first time since his old college days. Not knowing if he would have another opportunity to win a title unfolded into may be the legends final 60 minutes on a football field. He didn’t have a legendary game by any means, he simply did enough to keep the Broncos in good position. The defense caused a fumble and touchdown on the recovery on the first drive of the game and from their held the Panthers to only 1 touchdown. Peyton had an opportunity to play with the lead allowing him to play conservative enough to withstand the constant pressure the stout defense of the Panthers presented. Manning had a pedestrian day with 141 passing yards off of 13-23 passes and 1 interception while being sacked 6 times as well.

Not to take anything away from his accomplishment but he was pretty lucky that the Panthers came out sluggish and looked as if the moment had gotten a bit too big for them. Carolina committed uncharacteristic turnovers (caused by an elite Broncos Defense) and the offensive line who has been one of the best all season met their match. Von Miller and Demarcus Ware put pressure on Cam all day long leading the D with 4.5 of the 7 sacks on Newton. Von Miller would go on to win MVP adding 6 tackles to go with his 2.5 sacks and 1 of those forced fumbles on Cam. The most important asset for the Broncos goes to the kicker Brandon McManus who was responsible for 10 of the teams 24 points.

Carolina folded under the Broncos pressure

Cam Newton came into Sunday a day from winning the NFL MVP award for the first time and solidifying himself into super stardom. He played a safe conservative game in Super Bowl 50 but his patience seems to have bit him in the butt as the Broncos defense constantly put him on the turf. You could see the frustration as Panthers receivers dropped a number of his passes and the running backs struggled to gain any positive yards. The defense was put in tough field position most of the night but they still managed to keep the Broncos out of the end zone for most of the game limiting them to field goals. Cam over threw a few passes in the first half but seem to get in a groove in the 2nd but every time it seemed the Panthers would gain moment they turned the ball over. Mike Tolbert and Cam Newton fumbled twice. Cam numbers wise were pretty decent 265 on 18-43 passes. He had a lot of success running the ball in the 1st half but seem to shy away from running in the 2nd. From my perspective he wanted to show us how much of a pocket quarterback he was and it did not play to his favor. He was a sitting duck in a constant collapsing pocket.

Carolina missed an opportunity to sketch their names into history. I still believe they were the better team but Sunday Denver came ready to play. They made very few mistakes and took advantage of the Panthers when the opportunity presented itself. Congratulations to the Broncos.

The legacy of Peyton Manning won’t be defined by this performance at all. It has been somewhat over shadowed by the Cam Newton press conference and other news already and it is only a few days old. Manning will go down as one of the best to ever do it and it is only fitting that he stood on that stage one last time with the Lombardi trophy in hand. He didn’t necessarily say his good byes but some of those throws had some indication hanging on them, trust me. The new era of athletes is among us and Cam Newton, Josh Norman, Luke Kuechly are leading the Panthers with a style of football that can easily get them back to the championship next year. As one career comes to a story book close another one is starting on his upward climb to superstardom. How did you enjoy Super Bowl 50? Tell me what you think in the comments.

Previous ArticleClinton, Sanders, and What Comes Next After IowaNext ArticleStreet Fighter V Review: A Glorified Demo