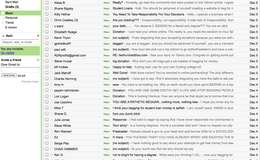 While many of her peers paid for their tuition from money their parents had saved, financial aid and scholarships, Kelli Space took out student loans to pay for her private college education.

By the time Space graduated in 2008 from Northeastern University, she had borrowed $160,000 to pay for tuition. Including interest, she was left nearly $200,000 in debt. Despite working 60 hours a week at a full time job, as well as taking on part time jobs freelancing and babysitting, she nevertheless struggled to pay back her loans. Then her friend persuaded her to start a website asking strangers online for donations.

The idea started when she heard about Karyn Boznak, Space said, who had run up $20,000 in credit card debt and began a blog, “Save Karyn.” The site used crowd sourcing, or utilizing the help of strangers, to collect donations. Space began her website “Two Hundred Thou” last May, but it didn’t take off until she turned to Gawker.com for advice. After Gawker posted a story about her Website online, a host of news organizations followed, including the Huffington Post, CNN Money and Yahoo! Finance.

Since the launch of her website, Space has received donations ranging from 10 cents to $100. She has also read thousands of emails, half of them supportive, half hate mail. Some wished her luck and offered encouragement, while others blamed the bad economy on her and told her to pay for her own tuition. Space said she focused just on the donations and emails, not the hate mail.

Last month, Space teamed up with EduLender, after being contacted by its CEO, Sue Khim. EduLender is a student loan comparison site that helps students research loans, avoid over payment, and understand the cost of borrowing, Khim said. The Website also gives tips for avoiding college debt and allows students to open a tuition gift registry, where friends or strangers can donate to pay off student loans.

In February, the Website will offer help to students considering loan consolidation. Space has since moved her website onto an EduLender profile, where she continues to solicit donations to pay off her debt. As a consultant, she runs her ideas with EduLender and works to build up a social networking community on the site, where students can give each other advice.

“We need to stop pushing college dream,” Space said. As a student, she felt it was necessary to go straight into college, but she advises students to consider other options, like going to community college first, to cut down costs.