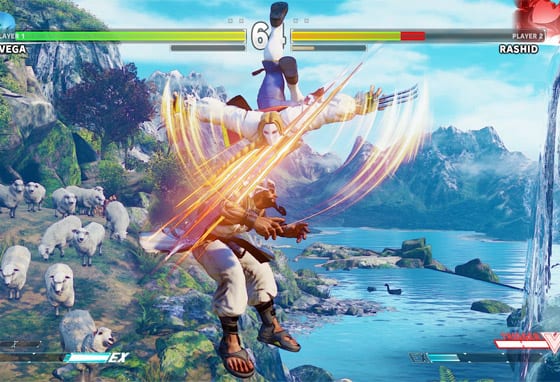 Street Fighter V is pretty much a glorified demo. Once again it’s time for a new numbered version of Capcom’s quintessential fighter, and once again it’s time to break out the fight sticks and hit the lab to do some good ol’ fashioned combo learning. Wait, nevermind, that’s applicable to Street Fighter IV because that’s the game where those options actually exist.

Capcom’s not always known for doing things to please their fans, but Street Fighter V being released before most of the planned features are actually included may be the most insulting thing they’ve done in quite some time. Seriously, on day one several features are either completely missing or greyed out saying “this content will be available in March”. Right now, Street Fighter V is a glorified demo that costs $60.

If you’re willing to essentially kickstart a game in progress, Street Fighter V is absolutely beautiful in execution. The fighting is terrific, the stages are gorgeous, the music is amazing, and the netcode (when it works) seems to be decent. Unfortunately, the game is also plagued with problems: There’s hardly any content, extremely long load times, and a network that simply doesn’t function now that the game is available to the public.

As it stands, Street Fighter V released with the following options available for immediate play:

·       Story Mode – which is actually nothing but small comic book style vignettes to introduce characters and begin building a prologue for the real story mode coming out in June. This mode consists of two to four fights, with newcomer Laura being the only fighter to have four challengers. It’s generic as can be and really only serves to help you earn some in-game currency which can be used to unlock future characters and costumes. These are one round fights and you can easily complete the prologue for all 16 characters in about an hour and a half.

·       Survival Mode – 30 consecutive fights that allow you to choose power-up options at the end of each battle. These are also one round fights but you’ll probably find yourself bored by the 10th bout. You use your earned score to purchase options at the end of each fight. If you’re low on health, you can purchase some health if it’s an option given to you. Would you prefer getting triple the points next round? You can but the cost is that your Stun gauge is full so any damage will put you into dizzy status. It’s a nice balance of risk and reward, but it’s monotonous since Hell Difficulty is 100 levels.

You will also like: Review: Dissidia 012 [duodecim] Final Fantasy

That’s it for single player experience. There’s challenges but guess what? They won’t be available till March.  How, in 2016, do you release a Street Fighter game that DOES NOT have an Arcade mode? The most basic element of fighting games is missing from what can be considered the cornerstone of arcade fighters. It’s no wonder Ono-san had to apologize for the release state of Street Fighter V’s servers, but it’s even more mind-blowing that Capcom forced this terribly unfinished project onto store shelves and digital marketplaces.

Among everything else, there’s a very real problem with hitboxes. It’s embarrassing to see visual contact between characters only to not register a hit. If you let characters idle and throw a kick, there’s a good chance you’ll see your fighter’s limb go right through the other person with no registered hit. Chun Li is notorious for this with her kicks, and don’t even get me started about the silly censorship of R. Mika and Cammy as well. If that stuff isn’t enough, online failed miserably on launch night and still continues to struggle even a few days out, meaning you don’t get any credit for playing in offline mode (this means no character exp, player levels, or Fight Money) and battle lobbies were a catastrophic mess. They seem to be working better now, but it’s still

Unfortunately, unless you’re a hardcore member of the FGC or practicing for tournaments like the Capcom Cup or EVO, there’s absolutely no reason to buy Street Fighter V right now. With games like Uncharted 4 and The Division just around the corner, there isn’t any reason to buy Street Fighter V until the game is actually closer to a finished state in June. There’s not enough game here to accurately give a score to – but since we are required to grade the content available at release, half the grading scale is missing as well. Perhaps in June we’ll make the other half of a review score accessible when the content it should be based on shows up.

You should also read: The top 5 video games of April