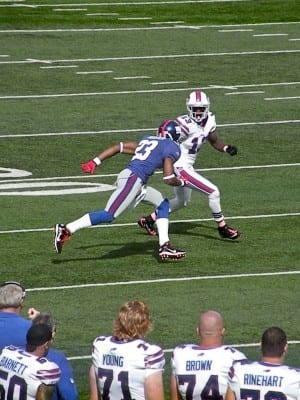 With time running out Monday for the Buffalo Bills to use their franchise tag, they opted to re-sign wide receiver Stevie Johnson for several more years.

The deal worked well for Stevie Johnson, given that he would have earned roughly $9.4 million if he had been tagged, but the Bills new deal gives him five years and $36.3 million, reports USA Today.

Johnson’s presence on the field has been a great asset to Buffalo, given that he has had 17 touchdowns since 2010 and over 1,000 receiving yards for the last two seasons.

The 25-year-old tied Buffalo’s Eric Moulds as the only other Bills receiver to have 75 plus catches in consecutive seasons.

Stevie Johnson has also garnered much publicity from his outlandish TD celebrations. Johnson was fined twice in five weeks for this with the second leading to a benching by coach Chan Gailey for the final few quarters of the season’s last game against New England, which they lost 49-21.

Johnson though said he is “done” with end-zone partying. But, his colorful behavior seems to not be entirely quelled. In his contract negotiations, he made a specific condition involving Buffalo’s quarterback Ryan Fitzpatrick and his outrageous hairstyle.

“If you get a Mohawk mullet with a beard and a design on the left side I’ll sign TODAY! If you don’t think everyone in the billsmafia you’ll be letting down … The ball is in your court!” Johnson apparently texted to Fitzpatrick. “Don’t be selfish!”

But, with Stevie Johnson re-signing, Fitzgerald decided to get his ears lowered a bit.