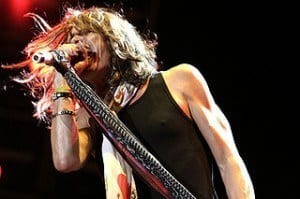 SNL skit got it wrong

Steven Tyler isn’t laughing at Mick Jagger’s impression of him on this past weekend’s SNL. Steven Tyler thinks the Rolling Stones front man got it all wrong.

In the skit, titled So You Think You Can Dance At An Outdoor Music Festival, Jagger spoofs the American Idol judge. He adorned a long curly wig, Tyler’s signature scarf’s and duster.

The pseudo Steven Tyler then declares, “Chicken strips are tasty,” and tosses the box in his hand.

While many thought the skit was down right hilarious, Tyler wasn’t impressed was one bit.

Tyler did remark that he thought the skit was “fun,” which is rather a cryptic remark, given that Tyler didn’t elaborate on it. However, Steven Tyler was fine with Mick Jagger sporting long hair again.

“I thought he looked good with long hair,” said Tyler. “I’ve always wanted him to grow it back.”

SNL is known for their ribbing of celebs ranging from the President to the Octomom. Perhaps, Steven Tyler needs to calm down a bit. Most would be honored to be parodied on the infamous late night show.

Check out the clip below. We apologize in advance for the poor quality.